Jun 3, 2011 Source: empirestrikesblack.com
My curiosity was piqued when a friend told me of the upcoming Wall Street documentary exposé ‘Inside Job’. It’s got some pretty good reviews, and perhaps it will pack enough punch to educate the general public about the theft of taxpayer money that constituted the euphemistically termed ‘bailout’. Online reviews have praised the film, “A wake-up call of macroeconomic proportions”, “Economics explained beautifully” – certainly sounds worth a watch. 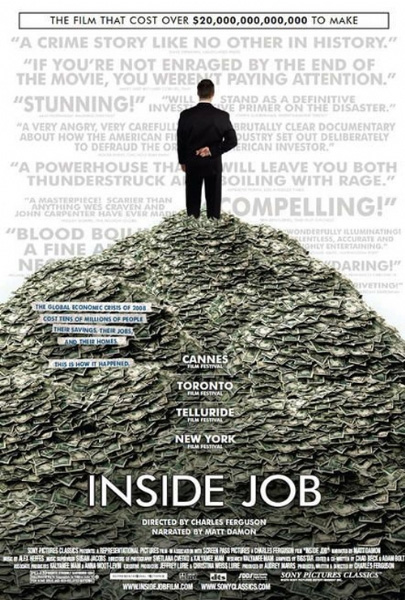 Admittedly though, you have to be quite naive to think that a genuine expose of Wall Street could even see the light of day in Hollywood, considering the corporate nature of media ownership. After a short Internet search, things begin to fall into place.

‘Inside Job’ is directed by Charles H. Ferguson. His past works include a film called ‘No End in Sight – The American Occupation of Iraq’ – a piece critical of the Bush administration’s management of the war in Iraq. So far, so good. Sort of. 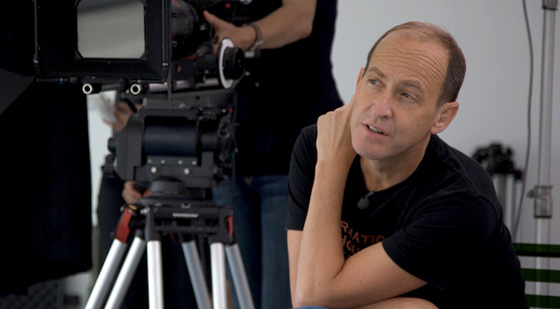 The alarming thing about Ferguson is his lifelong membership of the Council on Foreign Relations. See CFR’s private membership roster and Ferguson’s Wikipedia page.

CFR is a think tank which, in a nutshell, exists to shape the US international agenda in favour of its corporate members. CFR’s corporate roster is here, and it makes for some startling reading. The founding member corporations of CFR are as follows:

How can a ‘lifelong member’ of this global banking and Big Oil corporate cabal make such an exposé? Well, Ferguson’s membership of CFR does not constitute a conflict of interest as one might surmise. Instead, it illustrates his real motives; his film is not an exposé, it is a distraction.
The focus of Ferguson’s 2007 piece, ‘No End in Sight – The American Occupation of Iraq’, is the US government’s post-invasion decision-making failures. Insufficient troop levels, looting in Baghdad, and corruption in the Iraqi government form the backbone of the film. Clearly, the film distracts audiences from what really matters: the decision to go to war in the first place, absent of evidence, and the relentless propaganda campaign from the media that aimed to legitimise the illegal war.
Let’s take a look at some of Ferguson’s other fellow CFR (corporate) members:

Many of these companies have profited to the tune of trillions of dollars from the destruction and reconstruction of Iraq and Afghanistan. Some even played integral parts in calling for the wars. Two of these corporations, DynCorp and KBR, are even in the ‘top ten’ list of companies profiting from the illegal invasion and occupation of Iraq.

As with ‘No End In Sight’, ‘Inside Job’ will not reveal the truth or bring the real culprits to light. Ferguson’s agenda is clear; he is a mouthpiece for his corporate CFR bedfellows. This type of pseudo-exposé aims to distract audiences from the significant truths by focusing on secondary matters. The viewer will be led around by the nose like a blinkered horse, while Ferguson’s war criminal pals can continue bombing and looting to their black hearts’ content.

The writers at The Daily Bell explain it much better than I can. I’ve paraphrased a few apt passages from two articles published there.

The financial elite pushes memes that are designed to avoid casting blame on the central banking system which, in the modern era, involves printing money-from-nothing, with no underlying asset base. The idea is to create diversionary blame that can then be translated into further government action, usually regulation.

This finger pointing exercise was used successfully during the Great Depression in America when “Wall Street” was exclusively blamed for the market crash, rather than reckless Federal Reserve inflation.

What this means in practice is that central banking blows up economies, leading to more regulation (something which Ferguson calls for himself) which further concentrates power in the hands of a few, allowing government and society to be even more efficiently run by the elite. It’s kind of a closed feedback loop. The more chaos, the more regulation, the more leverage the elite has to reignite the process. Power is continually being centralised and the middle classes themselves (the elite’s ultimate target) will actually clamour for the regulation that facilitates the process.

Notwithstanding the criminal recklessness and greed on the part of Goldman Sachs et al, the money-from-nothing central banking system is the root problem. Ferguson’s dog and pony show distracts viewers from this by focusing on a few fall-guy figures in the private sector. He can call for them all to go to prison; we all know that none of them actually will. Inside Job? I couldn’t think of a better name.

Watch Inside Job (The Full Movie)

The Capitalist Conspiracy: An Inside view of International Banking Written and narrated by G. Edward Griffin (1960's) An old film, made sometime in the 60's. This is an adaptation of a documentary filmstrip tracing the history of a small group of people who control the money systems of the world. It shows how this group is protected by governments and how its wealth is derived by creating money out of nothing. We see how this group wields power through government, foundations, education, and the mass media. It has aided such regimes as Russia and China, not because it is pro-Communist, but because a visible enemy and the threat of war have been useful in persuading the masses to embrace the group's ultimate goal: a world government which they expect to control from behind the scenes. They are now working to replace fear of nuclear war with fear of global pollution as the motivation for world government. It is clear that the plan revealed in this program continues to unfold. Monopoly is not an outgrowth of capitalism. Monopolists lobby for laws that give them advantages in the market place. Monopoloy is not based on free-enterprise competition, but the escape from it. It is not the product of capitalism but the bedfellow of socialism

The Money Masters is a non-fiction, historical documentary that traces the origins of the political power structure. The modern political power structure has its roots in the hidden manipulation and accumulation of gold and other forms of money. The development of fractional reserve banking practices in the 17th century brought to a cunning sophistication the secret techniques initially used by goldsmiths fraudulently to accumulate wealth. With the formation of the privately-owned Bank of England in 1694, the yoke of economic slavery to a privately-owned "central" bank was first forced upon the backs of an entire nation, not removed but only made heavier with the passing of the three centuries to our day. Nation after nation has fallen prey to this cabal of international central bankers.