Dec 23, 2010 Source: sciencedaily.com
Möbius symmetry, the topological phenomenon that yields a half-twisted strip with two surfaces but only one side, has been a source of fascination since its discovery in 1858 by German mathematician August Möbius. As artist M.C. Escher so vividly demonstrated in his "parade of ants," it is possible to traverse the "inside" and "outside" surfaces of a Möbius strip without crossing over an edge. For years, scientists have been searching for an example of Möbius symmetry in natural materials without any success. 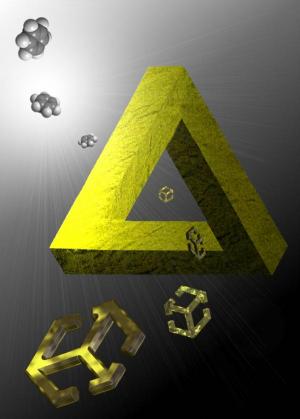 Berkeley Lab researcher have discovered Möbius symmetry in metamolecular trimers made from metals and dielectrics.(Credit: Image by Chih-Wei Chang) 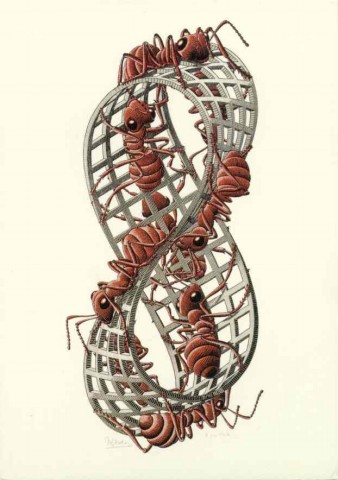 In his “parade of ants,” Artist M.C. Escher demonstrated that it is possible to traverse the “inside” and “outside” surfaces of a Möbius band without crossing over an edge.

Now a team of scientists has discovered Möbius symmetry in metamaterials -- materials engineered from artificial "atoms" and "molecules" with electromagnetic properties that arise from their structure rather than their chemical composition.

Xiang Zhang, a scientist with the U.S. Department of Energy’s Lawrence Berkeley National Laboratory (Berkeley Lab) and a professor at the University of California (UC) Berkeley, led a study in which electromagnetic Möbius symmetry was successfully introduced into composite metamolecular systems made from metals and dielectrics. This discovery opens the door to finding and exploiting novel phenomena in metamaterials.

"We have experimentally observed a new topological symmetry in electromagnetic metamaterial systems that is equivalent to the structural symmetry of a Möbius strip, with the number of twists controlled by sign changes in the electromagnetic coupling between the meta-atoms," Zhang says. "We have further demonstrated that metamaterials with different coupling signs exhibit resonance frequencies that depend on the number but not the locations of the twists. This confirms the topological nature of the symmetry."

In science, symmetry is defined as a system feature or property that is preserved when the system undergoes a change. This is one of the most fundamental and crucial concepts in science, underpinning such physical phenomena as the conservation laws and selection rules that govern the transition of a system from one state to another. Symmetry also dictates chemical reactions and drives a number of important scientific tools, including crystallography and spectroscopy.

Read the full article at: sciencedaily.com