Dec 25, 2009 Source: atlasobscura.com
If there is one thing you don't want to be in Sweden during Christmas, it's a Yule Goat! 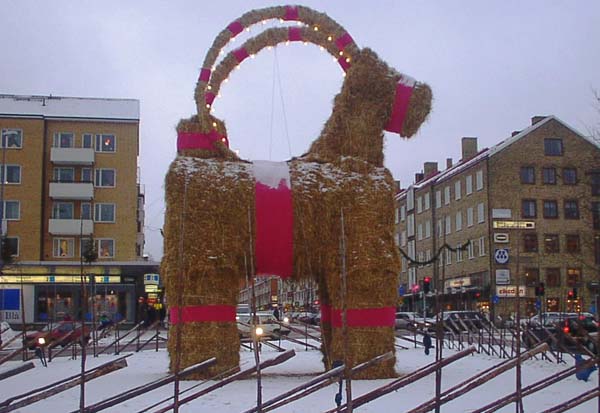 The small Swedish town of Gavle harbors a history of repeated sustained vandalism, unexpected in the polite mild-mannered Nordic country.

Making of Yule Goats, straw goat figures are an ancient Christmas tradition in Nordic countries, dating back probably even to pre-Christian times and pagan celebrations of winter solstice. In 1966 an advertising consultant, Stig Gavlén, came up with the idea of making a giant version a Yule Goat and placing it in the town square. Ironically the "chief engineer" on this project was his brother Jesper Gavlén, also the towns fire department chief.

At the stroke of midnight on New Year's Eve, the goat went up in flames. Thus the tragic history of Gavel Goat began.

In following years the goat has been burned a total of 23 times, in a few instances in mere hours after being assembled, sometimes even before being actually being built. In addition to that, it has been smashed to pieces several times, and once even run over by a car.

Vandalizing of the Yule goat has become something of a dark tradition for the town. The organizers went through a long list of measures to try to protect the goat, or at least ensure its survival until Christmas. The list over the years includes protection by police, firemen, hired guards, bands of volunteers, webcams and fireproofing the material with chemicals. The price tag of goat construction went up ten fold in years between 1996 and 2005, reaching 100,000 Swedish kronor. The 2005 attack sparked the biggest wave of inanimate-goat violence in Sweden so far, with half a dozen copycat goat-burnings all over the Sweden.

Nowadays people can even place bets on goat's survival with certain Swedish and British bookkeepers.

Since 1986, two goats are built, one by a society of Southern Merchants and the other one by Natural Science Club of Vasa School. This split is a result of goats complicated history, though both goats suffer the same inevitable fate.

In 2009, the Southern Merchants version survived an arson attempt on December 7. It was finally stolen on December 14. Someone tried to throw the Natural Science Club goat into the river on December 11. On December 23 this goat was torched after a coordinated DDoS attack on the two websites hosting live video webcam feeds.

Nothing, it seems, can save the Yule goat.

1966: The first goat is burned down - beginning the tradition
1970: It is set on fire six hours after being erected
1971: Schoolchildren build a miniature; it is smashed to pieces
1976: A car crashes into the goat
1979: Goat is burned down before it is finished
1987: Goat is treated with fire-proofing, but is still burned down
2001: Tourist from Cleveland, Ohio is jailed for burning goat
2005: Two men dressed as Santa and Gingerbread Man torch goat 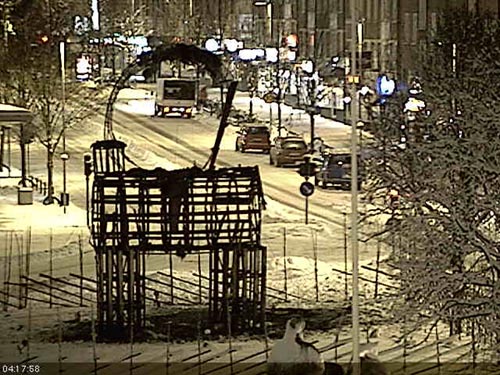