Ior Bock, The Bock Saga & Excavation of the Temple of Lemminkäinen

May 9, 2014
In 1984 a Finnish man named Ior Bock came forward and told the world that his family, through thousands of years, passed down an ancient oral tradition – The Family Saga from Strömsö Manor or as it’s more commonly known “The Bock Saga.” The saga explains the origin of man on earth and the origin of the Nordic culture that, according to the tradition, existed long before Babylon and Mesopotamia. Throughout three decades, before his tragic death in 2010, Ior Bock passed on his knowledge to a loyal group of people, consisting of Finns, foreigners, friends and students. One of those people was Michel Merle who joins us from Holland to talk about the story of Ior Bock and the Bock Saga. The tradition is a non-conventional history and chronology where the central mythology is found in root language, sounds and words. Merle met Ior Bock on the way back from India in 1975 and spent time with Ior and friends almost yearly in Goa and Finland. He has been learning about The Bock Saga since 1984 when it came out. He works as an international exhibition builder and painter to make a living. In the first hour, we discuss the expansion of the Roman Catholic Church into the northern lands and how the tradition went underground and kept within the Boxström family. In the second hour, we speak about the excavation of the Temple of Lemminkäinen, the largest so far discovered subterranean cave in Finland. According to the tradition, generations of Norse relics and artifacts have been found in the cave from thousands of years ago. 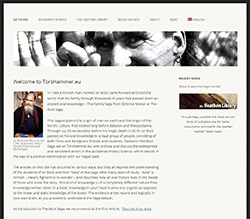