In this article I explore the meaning of the images scratched, engraved or painted on to rock surfaces in northern Fenno-Scandia. Some of these images have been interpreted as symbolic representations of the Earth Mother figure whose existence and agency underlie much of the pre-Christian world-view of the Sami people. Before examining the evidence of rock art representations, some background will be presented for this region and its inhabitants.

The Sami, formerly known as Lapps, are an indigenous population who occupy today the northern fringes of Norway, Sweden, Finland and the Kola peninsula of Russia. 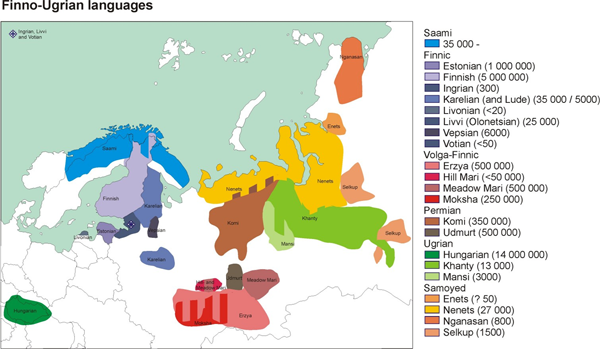 Figure 1. Map showing the Sami language compared to other Finno-Ugrian languages.
The various Sami languages all belong to the Finno-Ugrian family, with linguistic connections to Finnish, Estonian and various languages in northern Russia (Figure 1). The Sami number today about 100,000 people, and we think of them as occupying the sub-Arctic fringes of nations that extend further south. The archaeological evidence, on the other hand, suggests that in the past the cultural links of the Sami people were mainly to the east, with Finns and other related peoples in northern Russia.

Rock art in Fenno-Scandinavia can be divided into northern ‘hunter’s art’ and southern ‘farmer’s art’ styles. The distribution of rock art sites shows that ‘hunter’s art’ is found not only in the area where Sami people live today but also across a much more extensive area settled in earlier times by the ancestors of the Sami (Figure 2). The rock art takes various forms, including polished carvings, pecked engravings and paintings made with red ochre. Very often the rock art is found in sites that are associated with water, for example springs, waterfalls, rivers and close to the sea. The commonest motifs are zoomorphs (often elks and reindeer), boats, and anthropomorphs. In this article I will suggest that many of these rock art motifs are direct or indirect representations of the Mother Earth deity known to the Sami as Máttaráhkká.

Máttaráhkká within the Sami cosmos

Who is Máttaráhkká and what is her place in the Sami cosmos, or world view?

We can attempt to represent in visual form the Sami world-view, using a range of historical sources (Figure 3). As with other northern Eurasian peoples, for the Sami the cosmos consisted of upper, middle and lower worlds. The Upper World was associated with the South, with warmth and life, and with the colour white. It was the domain of both the Sun (always female gendered) and the Earth Mother figure (Máttaráhkká). The Middle World was the everyday world in which we live, associated with the colour red. People shared this world with special liminal creatures such as bears. Through sacrifices and rituals, humans were able to gain access to these other worlds.

In Sami myths, a River of Blood separates the Middle World from the Underworld. Across this river the souls of the dead must cross after death, while at birth new souls come back from the Underworld to the land of the living. Sinister diving creatures like otters, loons and seals can travel underwater to the Underworld, which has associations with the North, cold, the colour black, and with bubbling springs and deep caves.