Dec 11, 2015
Pete Papaherakles was born in Greece and has lived in the US since the age of 9. He is a writer for American Free Press (AFP) and the Barnes Review, as well as an illustrator and political cartoonist and AFP’s outreach director. Victor Thorn founded Sisyphus Press and has authored 56 published books, including “The New World Order Exposed” and “9-11 on Trial.” He also co-founded WING TV (World Independent News Group) and is an investigative reporter for AFP, with nearly 1,000 published articles. “America’s Racial Powder Keg: How a Violent Dependency State Has Been Created Within the Black Community” is a new compilation edited by Victor, which includes 16 of his articles and 22 articles by Pete Papaherakles, along with a few others by Dave Gahary, John Friend, and Bill White.

Pete and Victor are with us to discuss how “America’s Racial Powder Keg” came together and what prompted the different writers to address the very taboo racial issue that has become completely distorted within the Marxist educational system and controlled MSM. We look at the problems of race that have escalated dramatically since Obama came into office and how his bid for “change” has resulted in a hotbed of issues for “post racial America” that are being selectively ramped up by the media. Victor describes self-hating White liberals as the root cause behind the perpetuation of the narrative of evil White oppressors and inherent White guilt, and we consider how the establishment uses racial tension to disenfranchise the founding race of the US. We analyze how the media’s focus on isolated events such as the Treyvon Martin and Michael Brown shootings are undermining local control by police departments, bringing on federal intervention and furthering the Marxist war against nationalism and family values. Then, Pete talks about the brainwashing propaganda concerning slavery that conceals the real source of racism stemming from black slave masters looking to bolster their own power. We also discuss black crime statistics and the discrimination against merit that has been implemented through affirmative action.

In the members’ segment, Pete illuminates our progressive move towards a fake reality that promotes the narrative of terror for the political agenda of the Empire. We talk about fear conditioning and learned helplessness that is programmed as a means to demoralize the people, and we look at the false flag factor that creates a kind of schizophrenic reaction to Islamic insurgence infecting the West. We get into the issue of pathological altruism and the fallacies of equality within the liberal belief system. Pete clarifies the history of slavery and asserts that Whites should discard the accepted storyline that blacks continue to be owed reparations. Later, we discuss the overall conditions that existed for sub-Saharans prior to their encounters with Whites, along with the racial differences that have allowed for the advancement of the Western civilization.

americanfreepress.net
Swedish woman raped by "refugee" refuses to report it because she feels sorry for him

Noah OST - The Judgement Of Man 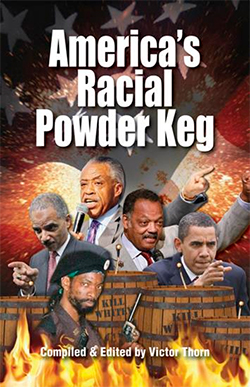