Blood & DNA: Preserving the Ancestral Spirits and Wisdom of our Race

Mar 2, 2015
Ishtar Babilu Dingir is a former journalist from England, specializing in holistic health and environmental issues. She is now a shaman in her home town of Glastonbury in Somerset, where she concentrates on working with the spirits of the land, in order to reaffirm the sovereignty. She's also the author of The Sacred Sex Rites of Ishtar: shamanic sexual healing and sex magic, and Lord of the Dance. More recently, she has been writing about the importance of preserving race in order to access the wisdom teachings from the ancestral spirits, which is the focus of our discussion. Ishtar begins by describing the initiation, training and practices of the shaman, one who journeys into other dimensions to get guidance from entities and bring back information to the community or individuals as a form of healing. She explains about information contained in our DNA that holds the wisdom of our ancestors, and how long ago an impetus from Rome largely eradicated this knowledge. We discuss pre-Christian civilizations, the Abrahamic narrative, the Protestant movement, and hidden information that is used to disempower the masses. Further, we'll consider the identity crisis of the West, mainly caused by the metaphysical being left behind, a lost connection to our ancestors, and an unhealthy focus on materialism. Then, Ishtar speaks about the three worlds of shamanic journeying, the Fae of the Middle World who works in partnership with man and the land, the worldwide importance of the shaman in tribes prior to the agricultural phase, and the merchant class rule that is achieved by the propaganda machine. In the members' section, we explore human diversity, the shamanic consciousness, the awakening process, and ancestral wisdom that has been lost in the half-reality of the surface world. Ishtar tells about the indigenous culture of England and the ancient sites of Burrow Mump, Avebury and Glastonbury. We look at the destabilization agenda of uncontrolled immigration, the need to develop a consciousness of human biological diversity and race, and the contrived experiments of monoculture. At the end, Ishtar underlines the urgency of staying in touch with our ancestry and learning the way of the shaman as a means to awaken to one's true identity and destiny.

ishtarsgate.wordpress.com
ishtarsgate.com
theholisticworks.comtheholisticworks.com
Sutton Hoo: Anglo-Saxon Ship Burial
Free to Download – Shop GMO-Free in the UK App
The Journey of a Lifetime: Rites of Passage and the Ancestral Wisdom
The Faery wisdom about race, Lucifer and the rivers of blood
The geomantic knowledge and practises of King Alfred the Great
The Birth of the Radiant Child on the Winter Solstice
The Mysteries of Britain, the Matter of Sovereignty and The Glastonbury Declaration
Mircea Eliade's fascism
What is Shamanism?

The Sacred Sex Rites of Ishtar
Lord of the Dance 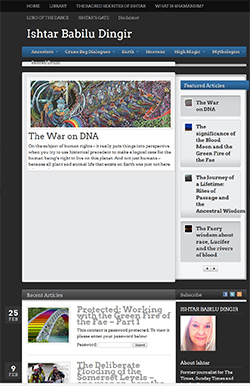