Crisis in Thinking & False Assumptions of an Incomplete Science

Gregg Braden is known as a pioneer in bridging science and spirituality. For more than 27 years, Gregg has explored high mountain villages, remote monasteries, and forgotten texts to merge their timeless secrets. His discoveries inspired books as: The God Code, The Divine Matrix, Fractal Time, and his newest, Deep Truth. In the first hour, we begin on 2012 and the Mayan perspective on cyclic changes. Gregg talks about how changes on our planet will force changes within ourselves. He shares what he believes will be a miracle manifested soon. Then, he explains how our modern worldview has brought us to a crisis in thinking which threatens our lives today. He says most of the world’s problems stem from a worldview based upon the false assumptions of an incomplete science. We’ll identify the five key false assumptions science has made and talk about new discoveries that can solve problems.

Deep Truth: Igniting the Memory of Our Origin, History, Destiny, and Fate
The Science Delusion 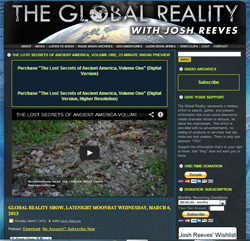