Demystifying the New World Order: From WWII to 9/11

Mar 9, 2015
John Friend is an independent blogger and journalist based in Southern California who maintains TheRealistReport.com. John focuses primarily on the events of 9/11, WWII revisionism, media deception and psychological warfare, power and influence of the Zionist Lobby in America, and the systematic assault upon and subversion of traditional Western European civilization. He is currently working on a book which will be examining and demystifying the "New World Order" conspiracy often discussed in the alternative media in an attempt to clarify the main goals and ultimate agenda of the Global Power Elite. We begin our discussion with reflections on what it’s like to awaken to the big lies, to tread into the darkness and dig into the murky areas where the truth lies, a process that is immensely difficult and depressing at best. John explains how the disillusioning events of 9/11 triggered him to take a closer look at the frightening narrative our government concocted to promote the institutionalization of the idea of the global “War on Terror.” John outlines some of the key foreign policies hatched from the fiasco, who was in control of the World Trade Center complex at the time, and Israeli players who had direct ties to the crime ring involved. Then, we consider the roles of the mainstream media/entertainment industrial complex and the educational system in perpetuating our fabricated history, the demonization of truth seekers who dare to criticize the diabolical, tyrannical agendas these events continue to promote, and the ongoing assault on Western traditionalism. In the members’ hour, we weigh up what it takes to objectively analyze the verifiable facts of the multitude of controversial and taboo issues eroding away our cultural and moral framework. We deliberate the urgency for informed, talented individuals to get motivated, take a stand, and spread the truth widely in the spirit of love and concern. We end with strategies for breaking through to our overwhelmingly politically correct, programmed, monoculture so they can effectively hear the alarm being sounded and join in the fight for the best interests of Western civilization. 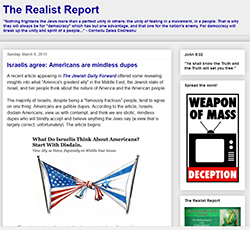