Kristiina Ojuland studied law and politology at University of Tartu. She is the founder and leader of the People’s Unity Party 2014. Ms. Ojuland was once the Foreign Minister of Estonia, a member of Riigikogu (Estonian Parliament), and served on the European Parliament in the Alliance of Liberals and Democrats for Europe (ALDE) group. Kristiina is with us to talk about the increasingly troublesome issue of mass immigration in Estonia and Europe in general. She sums up the demographic, economic and social climates of the small, relatively poor country of Estonia, where native populations are quickly being transformed by “refugee” transplants flooding in from North Africa and other Mediterranean countries. We discuss the special privileges and benefits that are granted to non-European immigrants and the major burdens the social system is experiencing through receiving foreigners who resist true integration and exploit the social order. Kristiina touches on the important point of security threats that are presented with mass quantities of Muslims entering Europe, many of whom are lacking passports, have questionable backgrounds, and are seeking new identities as ISIS fighters and Jihadist radicals. We expand on the crippling effects of political correctness in government and where this absurdity needs to be eliminated in order to speak frankly and honestly about immigration issues, namely the European Commission’s response to the recent boat crisis in the Mediterranean and their plan to impose non-voluntary immigration quotas across all EU countries. In conclusion, Kristiina talks about what she is doing to raise awareness about these extreme proposals and highlights steps that must be taken in order to preserve the continued existence of the unique cultures and peoples of Europe. 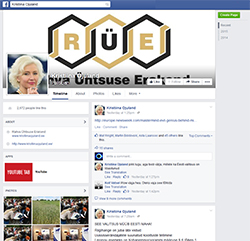