Apr 15, 2015
Marian Van Court is an independent scholar who has published many scholarly papers on eugenics and is the founder of the Future Generations website. She has conducted original research on IQ and fertility, and was first to discover the presence of dysgenic fertility in the US for most of the 20th century. She joins us to speak about the topics of some of her papers, including “The Case for Eugenics in a Nutshell,” “Massive Anti-Eugenics Hoax Uncovered: A Radical New Interpretation of the History of Eugenics,” and “Against Good Breeding: Understanding Jewish Opposition to Eugenics.” Marian begins by explaining the definition of eugenics and the problems surrounding the incorrect characterizations given to this subject, many of which are steeped in the fear created by propaganda campaigns. We take a look at how eugenics became unfashionable during WWII when Hitler’s name became associated with it along with genocide and mass murder. Then, Marian talks about the real face of eugenics in Israel, where it is has been widely practiced by the Jews since antiquity. We then discuss the benefits of raising the IQ of the population and how our genetic endowment for intelligence is rapidly decreasing. Further, Marian explains how the availability of birth control and the government’s encouragement of dysgenics is exacerbating the problem of fewer intelligent women producing offspring. In the second hour, we consider the course of dysgenics and the entanglement of economic issues that have caused those of lower intelligence to produce more and more offspring. Marian discusses the difficulties in exploring a non-PC subject such as eugenics and the disinformation that has led to a collective disassociation of the unpopular topic. We conclude with some thoughts on how we can un-demonize the field of eugenics and promote practical solutions for the betterment of the human race. 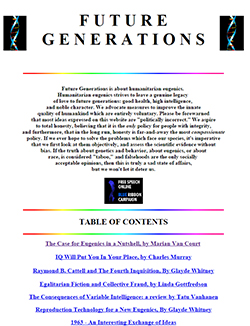