May 27, 2015
Tom Rowsell is a writer, film maker and historian living in London, England. He holds a Master's degree in Medieval History and is a traditionalist with a perennial spiritual philosophy. Tom is with us to talk about his film, From Runes to Ruins, the first ever documentary about Anglo-Saxon paganism. To begin, Tom explains his motivation for creating a film that is meant to contribute to the identity and dignity of the people of today. We discuss the phenomenon of our disenchanted youth, many of whom amble on meaningless paths with no connections to ancestral roots or culture. Tom describes how his youth spent growing up in the countryside of England shaped his passion for preserving the history of the Anglo-Saxons who founded his country. We look at the nature-based, pre-Christian pagan traditions of Europe that could not be shed with its shift to the imported Christian theological perspective. Then, Tom speaks about various locations of rich history depicted in the film and he gives examples of the deep connectivity that existed between all of the European countries in pagan times. In the second segment, we consider the modern issue of lack of cognizance of history and identification with the land. Tom illustrates treasures of extraordinary artifacts from medieval times found in the area of Sutton Hoo that represent the true richness and advanced nature of the early Anglo-Saxon cultures. Later, we discuss the process of industrialization and the enclosure movement that has forced people off their lands and uprooted Western civilization. Tom talks about the inspiration of J.R.R. Tolkien that has helped to restore a sense of folklore to a world that is craving a shared appreciation of spirituality, simplicity and tradition. We emphasize the importance of learning about and respecting our ancestors in order to exist with dignity and value, and also how we can shine a light on the distorted history and compulsory shame that has been drilled into our heads through academia. At the end, Tom gives us a lesson on ancient sacrificial rituals that were practiced in order to show gratitude to the gods.

runestoruins.co.uk
Watch: From Runes to Ruins
Survive the Jive Tumblr
Survive the Jive YouTube
survivethejive.blogspot.co.uk
Viking ring fortress discovered in Denmark
Golden Horns of Gallehus
Scutchamer Knob
Wulfing
Vikings
The First Vikings
Better Identification of Viking Corpses Reveals: Half of the Warriors Were Female
Vikings Were Pioneers of Craft and International Trade
Gilded female figure gives a glimpse of the Viking Age
Asatru Heathen Temple to be Built in Iceland to Commemorate the Norse Gods

Watch: From Runes to Ruins 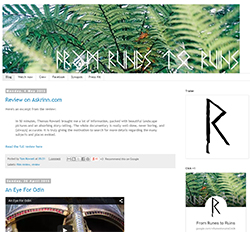