Mar 14, 2014
Dane Wigington has an extensive background in solar energy. He is a former employee of Bechtel Power Corp. and was a licensed contractor in California and Arizona. His personal residence was featured in a cover article on the world’s largest renewable energy magazine, Home Power. He owns a 1,600-acre “wildlife preserve” next to Lake Shasta in northern California. Dane focused his efforts on the geo-engineering issue when he began to lose very significant amounts of solar uptake due to ever-increasing “solar obscuration” caused from aircraft spraying. He also noted significant decline in forest health and began testing and research into the geo-engineering issue about a decade ago. He is the lead researcher for geoengineeringwatch.org and has investigated all levels of geo engineering from chemtrails to HAARP. We’ll discuss geoengineering, weather warfare, chemtrails and the collapse of civilization. Dane talks about the chemtrails spraying program and what compounds and particles are in it. Also, we discuss the global power struggle over the control of the weather and how it’s being used as a weapon. In the second hour, we’ll continue to speak about the recent cold snaps and how this has created an imbalance in global weather patterns. Dane also talks about the International Thermonuclear Experimental Reactor - the ITER - a new crazy experiment by scientists to create a star in a magnetic bottle. At the end, we tie in the global geopolitical game and the war on Russia.

geoengineeringwatch.org
Starfish Prime
The plan to wipe out Earth’s Van Allen belts with radio wave technology
Paleocene
Edward Snowden Uncovers The Truth Behind Chemtrails
The ’audacious plan to create a new energy source could save the planet from catastrophe’ - or destroy us all. 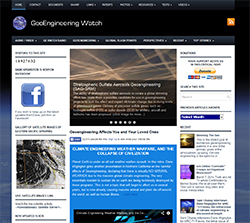