May 3, 2009
Retired doctor and activist David Halpin says, “I will carry on working for justice, and justice in the treatment of others, until I die”. David is passionate about the plight of the Palestinian people and was vehemently opposed to the wars on Afghanistan and Iraq, deploring the destruction of people and their medical services. In 2002 David was racking his brain about a way to help the dispossessed Palestinians, when the idea occurred to him. He would buy or charter a boat, fill it with food and medical supplies, and sail to Palestine. He also entered the public arena, with a group of other doctors, to seek a proper investigation of Dr David Kelly’s death. David was a British scientist and expert on biological warfare, employed by the British Ministry of Defense, and formerly a United Nations weapons inspector in Iraq. David says it is impossible that Dr Kelly died of haemorrhage from one small wrist artery, which is the first official cause of death. David Halpin was the first to publish these questions. In this program, David Halpin joins us to talk about the Israel-Palestine conflict, the crimes of the State of Israel and Zionism. He also talks about the ramming of the Dignity, a boat taking medical supplies to Gaza, by an Israeli gunboat in December 2008 and the murder of Dr. David Kelly. Topics Discussed: the injustice against the people of Palestine, Middle East, the enigma of the Middle East, Resolution 194 (1948), Zionism, Theodore Herzl, colonialism, The Green Line, access to land and water, invasion of Gaza, David's experience with the Dignity, former United States Representative Cynthia Mckinney, USS Liberty, AIPAC, the British-Israeli movement, the Project for the New American Century and The Dove and the Dolphin.

Photos of Dignity attacked by Israel

Damage to the Dignity after attack by Israeli gunboat 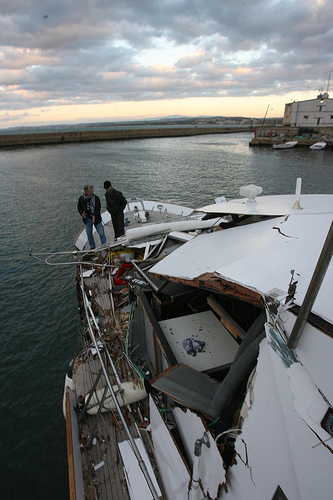 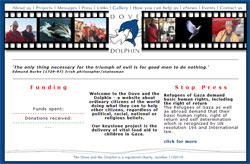