Jerry E. Smith (RIP March 8, 2010), writer, researcher, activist, editor and lecturer returns to discuss his close friend Jim Keith and their work together. Mr. Smith's life-long political and environmental activism and research has resulted in the publication of scores of news stories, opinion pieces and several books. He is best known for his work on weather manipulation and warfare. Jim Keith (RIP September 7, 1999) was an American author, best known works are "Black Helicopters Over America" and "The Octopus", co-written with Kenn Thomas, which details conspiracy theories around the death of reporter Danny Casolaro. Keith wrote other relatively popular books on conspiracy topics, including Mind Control/World Control, Black Helicopters I and II, OK Bomb, Saucers of the Illuminati, Casebook on Alternative 3, Casebook on the Men In Black and many others. One of the underlying themes of Keith's works is the notion that the UFO phenomenon is, in fact, of entirely earthly origin and has its roots within a parallel program of technological development. Keith maintained a steadfast commitment to the earthly-origin theory, and he believed that there was a concerted effort to put forth the extraterrestrial hypothesis into the public consciousness. Keith fell from a stage and broke his knee at the annual Burning Man arts festival held on the Black Rock Desert in Nevada. He went to the Washoe Medical hospital there and died shortly after surgery, in ICU, when a blood clot released and entered his lung, although the coroner's report listed cause of death as "blunt force trauma." Keith stated, prior to his death, "I have this feeling that if they put me under I'm not coming back". For the second hour, we discuss the agenda behind the “green” movement and how it connects with the banksters, global government, global warming and weather warfare. Other Topics Discussed: the "watermelon movement", Maurice Strong, Agenda 21, global government, scientific studies & military application, rain prevention during the 2008 Beijing Olympics, black ops, Wilhelm Reich, Project Popeye and the Earth charter. We end the program by discussing if a global government is inevitable and if so, will we ever have a benevolent one?

The truth about global warming - it's the Sun that's to blame

An experiment that hints we are wrong on climate change

HAARP: The Ultimate Weapon of the Conspiracy

Saucers of the Illuminati

Black Helicopters over America: Strikeforce for the New World Order

Weather Warfare & Global WarmingSecrets of the Holy LanceHAARP: The Ultimate Weapon of the Conspiracy 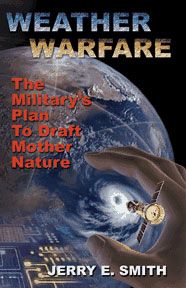