Party of the Danes: For the Future of Denmark

Feb 17, 2016
Daniel Carlsen is the leader of the Party of the Danes, or Danskernes Parti. Born in 1990, he graduated from high school in 2009. In the period between August 2009 and April 2010, Daniel served his military time as a Royal Life Guard, protecting the Danish castles and the royal family. In 2012 Daniel got an Academy Profession Degree in Marketing Management.

In the first segment, Daniel gives an overview of the time spent during his youth in the public school system in Denmark’s second largest city, Aarhus, where he began to understand the reality of his country’s rapidly changing demographics and the immigration issue. This led him to get engaged in political activism at an early age, and consequently in 2011 Carlsen and a group of other likeminded Danes built Danskernes Parti. Daniel speaks about some of the different political ideologies that define Denmark, including one he was a former member of, the Danish People’s Party. He describes the general social climate within some of the metropolitan areas of his small country, which host immigrant ghettos functioning as parallel societies with the equivalent of Sharia law governance. Daniel highlights Denmark’s population statistics, the symbolic laws that are in place to address the needs of asylum seekers, and the EU regulations that are designed to give “global diversity” a leg up within this tiny percentage of the world’s population. Further, we get into the negative consequences of the Schengen Zone and the real possibility of Denmark becoming one of Europe’s first Sharia zones via the open door policy that has essentially rolled out a red carpet for the world’s “refugees.”

In the members’ segment, we discuss how a renewed sense of nationalism is the first step to addressing concerns about the future of the Danish people. Daniel talks about Scandinavia’s unique media climate and how political events that Party of the Danes has participated in are being portrayed in the mainstream news. We consider the historical period in Germany that was defined by National Socialism, and we look optimistically to an updated nationalist movement’s ability to address Europe’s current territorial issues while invigorating a sense of national pride, dedication, veneration for culture, and appreciation for heritage. Then, we focus on the fundamental core of the Germanic peoples that is rooted in a deep regard for familial values and tradition – a structure that is being quickly eroded with large movements of foreign populations. Can we stop globalization? Will the Northern Europe’s native populations be pushed even further past the periphery? In conclusion, Daniel covers the goals of Danskernes Parti and their strategic plan to be represented in Parliament in order to address issues that will give the people of Denmark hope and trust in the survival of her people. 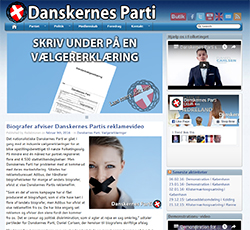