Mar 5, 2013
Dan Johnson is 19 years old, an Eagle Scout, and has been recognized as one of the top 30 impromptu speakers in the United States. He is a Political Science Major at Bowling Green State University, and speaks a moderate amount of Japanese. He was always interested in politics, and was appalled when he saw the direction our country was heading in. His wake-up call was watching a video on the NDAA in November. After doing further research, in late January, he founded PANDA (People Against the National Defense Authorization Act). PANDA is supported by groups across the political spectrum, and is now one of the fastest growing liberty movements in the nation; with over 25 teams across the country. He is recognized by many as an upcoming expert on the subjects of Liberty vs. National Security, the 2012 National Defense Authorization Act, H.R. 347, and the gradual slide toward an American Police State. In the first hour, we discuss the background of NDAA, what it entails and who would be targeted. We’ll discuss who is the threat according to the NDAA. In the second hour, we talk about changing definitions. When words lose their meaning, we lose our freedom. We also talk about the fallacy of someone else protecting our rights. Dan explains how the NDAA is a last desperate measure by corrupt forces. Later, he’ll give us an update on current news from PANDA as they battle it out in state legislation. We end talking about Obama’s criminal behavior as he violates the constitution and the need to push government back in their place within the boundaries of the constitution, which he says will solve most of our problems today.

Broder Daniel - When We Were Winning 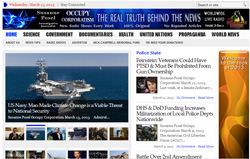