Oct 14, 2015
Tanstaafl is a pseudonymous racialist blogger and podcaster at Age-of-Treason.com. He covers a general interest of science, history, psychology, and language, with a specific focus on Jewish influence.

Tanstaafl first describes his personal evolution of unraveling the mainstream, politically correct discourse that has propagandized the origin of Europeans and reduced Whiteness to a nonexistent social construct. We look into how the fundamental European understanding of the science of human origins has been politicized and weaponized during the 20th century. Tanstaafl explains how the past science of race, which was based in rationalism and objectivity, has been psychopathologized, demonized and derailed. We discuss the Jewish saga of expulsion from societies across Europe since antiquity, and we evaluate the claim of oppression. Tanstaafl illustrates how Jews use mental word games to psychologically attack and intimidate any intelligent person who dares to question the Jewish parasitism that has crept into all facets of the government, corporate media and academia. Then, we focus on the 40,000 years of genetically homogeneous European civilization that has been marginalized by a politically correct shift from physical to cultural anthropology, resulting in the insertion of racial animosity and huge handicaps for scientists who wish to connect the past with the present.

In the members’ segment, we explore more on the different origins of humans and understanding how the science of racial differences has been politicized. We consider where the manufactured problems of multiculturalism have created blinding ethnocentrism within Europe and opened the door for a dehumanizing transformation of the White European collective. We look at what it will take for Europeans to reach a critical mass of racial awareness and take actions to combat monsters like Barbara Spectre, who unapologetically advocates the destruction of ethnic European societies. Then, Tanstaafl specifies how Hollywood blockbuster movies are infused with psychological warfare designed to divide nations and move homogeneous cultures away from a kinship or biologically related mindset. Later, we examine why Scandinavia, and Sweden in particular, keeps getting pushed to accept more and more refugees, and how the beautiful, blonde-haired, blue-eyed sub-race of Nordics seems to be specifically targeted for replacement. We conclude with some thoughts on Ann Coulter’s calling out of official Jew numbers, and how top cuck Donald Trump is shaping up to be just another pawn in the globalist war game. 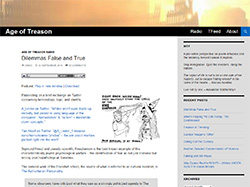