Jan 11, 2016
Brad Trun is the writer and video producer known as Libertarian Realist. His YouTube channel features commentaries, satirical bits, and travelogues exposing politically incorrect realities. In 2014, he recorded travelogues in 12 US states and 21 countries, documenting demographic decline on the streets of cities including Los Angeles, Chicago, Dublin, Malmö, and Copenhagen. Libertarian Realist currently lives in Montana, where he is working on a book that will flesh out an ideology for a new ascendancy.

Our conversation with Brad centers on the problems with open borders and the extreme leftwing ideology that ignores the cultural and biological realities that ought to sustain the foundations of any society. Brad talks about his philosophical journey of discerning the concepts that spawned libertarian ideals, including the non-aggression principle of ethics, and the system of objectivism developed by Ayn Rand. He explains Libertarian Realist ideology, which encompasses the four pillars of highly successful societies – genetics, borders, freedom and aesthetics. We discuss the Western origins of liberty and the founding traditions of America that were based in race realism and the creation of a nation comprised of people with adequate cultural understanding to live compatibly within a free society. Brad highlights where the persistent ideology of egalitarianism has perpetuated a failing system, with programs designed to close the achievement gap, such as welfare, affirmative action, and No Child Left Behind. Then, we look at how the increasingly blatant anti-White establishment and media is pushing more people away from the imposed ideals and religion of egalitarianism, and we take stock of what Trump is doing to delegitimize the nonsense of the political correctness in politics. Further, we get into the issues of anchor babies, minority votes, and the absence of immigration policies that protect the interests of citizens and enrich the population.

In the members’ segment, we discuss the recent mass shootings in Paris and San Bernardino that have been attributed to Muslim terrorists, and we try to make some sense of the flagrant double standards that tell us Islamophobia is wrong and multiculturalism enhances society. Brad links this discounting of natural instincts to the oppressive system of political correctness and the weaponization of history. We consider how denying genetic differences and opening borders to hostile immigrants with the propensity for radicalization will ultimately lead to the destruction of Western freedoms. We look at the unsustainability of perpetual economic and population growth, and the qualitative aspects of a demographic decline. Libertarian Realist stresses the importance of harnessing realistic goals that will bring us towards the ascension of society. The discussion rounds off with an analysis of the misguided US foreign policies that have dumped billions of dollars into the egalitarian delusion that we can remake the rest of the world into our ideal image of democracy for all. 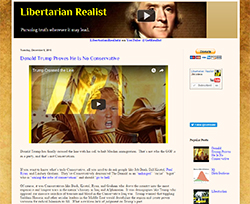