Apr 1, 2012
Håkan Blomqvist discusses the strange alien encounter of Richard Höglund, one of Sweden’s few reported contact cases. Håkan works as a librarian at the Norrköping City Library. He spends much of his free time at the Archive for UFO Research (AFU), which he co-founded in 1973. Today he is president of AFU and also vice chairman of the national organization UFO-Sweden. Equipped with an imaginative temperament and an existential curiosity, he is fascinated with both literature and life’s mysterious aspects. For many years he’s also been interested in the theosophical/esoteric tradition. Håkan is the author of three books (written in Swedish): ”UFO - in myth and reality”, “Strangers on our earth” and “A trip through time - UFO-Sweden’s history: 1970 - 2010”. Richard Höglund (1913-1977) was a rock-blaster by profession who claimed to have encountered aliens from another world for the first time in December 1965, while taking his dog for a walk at Grind Hult lake near the town of Uddevalla in Sweden. Richard was given a metal plaque with hieroglyph symbols on it from space people, which cured his kidney stone. Höglund was told by them to go to the Bahamas on a number of occasions to help the aliens work on a peace project. This led to a series of strange events, including Richard’s involvement with Mafia kingpin Lou Chesler in Bahamas. Many eyewitnesses were interviewed about this case and circumstantial evidence seems to support Richard’s Story. We’ll discuss this case in detail with Håkan. Later, Håkan tells us about another strange case, that of Gunvor and her husband, who went down to Mexico for purposes related to her husband’s engineering skills. They had a strange encounter with “Men in Black” type people and also the well connected corporate elite in Mexico, who during a dinner party claimed that they had access to a flying saucer. Gunvor’s husband allegedly went on a trip in the ship, while she stayed behind. Håkan shares with us her testimony of how this whole experience changed her husband completely – eventually leading to divorce. 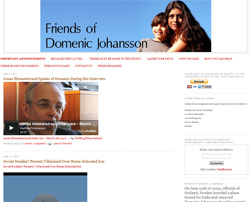