Sep 8, 2014
David Eberhard is a Swedish psychologist, writer and debater. He was a physician at the psychiatric emergency room at St Görans, one of Sweden's oldest hospitals. His current position is in the psychiatry department at Danderyd’s Hospital in Stockholm. He is the author of four books penned in Swedish, “How Children Took Power,” “Normal? From Madness to Everyday Psychosis,” ”Nobody Takes Shit In The Land of the Easily Offended” and “In the Land of the Security Junkies.” We’ll begin on Sweden’s obsession with security and discuss what long term conditions this obsession has created among the people. Since the state has taken on responsibilities that should be personally handled by an adult, most Swedes are incapable of dealing with conflict and hardship. This leads to psychological problems. Without challenges and the ability to overcome obstacles, the value of life diminishes. In the second hour, we criticize the much praised childrearing policies of Sweden. David explains how these practices will lead to long term psychological problems among the population. Despite extensive studies of monozygotic twins, which prove that environment isn’t everything, the state chooses to ignore research on genes, biology and human nature. Eberhard further warns about how this system is being exported to the rest of the west. We’ll also discuss why children need boundaries and discipline. Instead, we are now raising a generation of brats that have taken power from their parents. Later, we talk about Sweden’s gender neutrality craze. At the end, David talks about how those who dare speak of the problems with Sweden’s immigration policies are ostracized. 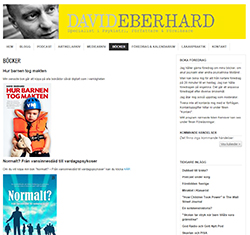