Nov 13, 2015
Erin Elizabeth is a longtime activist with a passion for the healing arts, working in the arena for 25 years. Her site, HealthNutNews.com, is among the top 20 Natural Health sites world-wide. She is an author and public speaker, and her stories have been recently featured by national networks.

Erin explains how she began reporting on the series of mysterious deaths of holistic doctors after the beloved Dr. Jeffrey Bradstreet, a renowned autism researcher, was found dead with a gunshot wound to the chest in June 2015. The bizarre circumstances surrounding his alleged suicide, compounded with the deaths of two more holistic doctors within the same 72 hour period, prompted Erin to become one of the prime researchers in the Bradstreet case. This has now turned into an unintended series covering the deaths of 13 holistic doctors that have occurred in the past four months. Erin talks about Dr. Bradstreet’s connection to GcMAF, a controversial alternative treatment for cancer and autism, and his research on the link between autism and vaccines. She highlights some of the great achievements of the deceased doctors, some of whom were using chiropractic and other unconventional medicine such as cannabis. She describes this series of strange suicides, murders, sudden deaths and missing person cases, all of which bear hard to dismiss connections and inconsistencies. We speculate on the media silence surrounding these events and the motives for deep-pocketed pharmaceutical corporations to take out their competition.

In the members’ section, we consider concerns that official investigations into these peculiar deaths have been corrupt, and Erin speaks about the collective pressure on holistic doctors. Erin shares how she got started on the road to health advocacy, along with her story of overcoming Lyme disease and excess weight through a holistic, natural approach. We talk about how the mainstream media pushes conventional medicine and why it’s so difficult for the average person to cast aside programmed beliefs and realize the detrimental effects. Erin says there is a promising shift to the acceptance of more alternative medicine as society is continually failed by the healthcare industry. We get into GMOs, glyphosate, recycling, and the toxic chemical compounds found in personal care products and processed foods.

healthnutnews.com
Recap on my Unintended Series: The Holistic Doctor Deaths
Famous Autism researcher and Doctor, Jeff Bradstreet, MD, died of alleged “self inflicted gunshot wound” to chest and found in a river
2 men being charged in the death of Holistic MD Teresa Sievers
The Hotdog Report 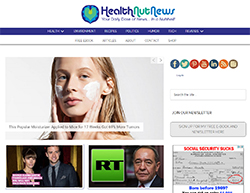