Nov 25, 2015
Piero San Giorgio is a Swiss author and former businessman and software executive. For the past decade, he has studied the global economic system and its dependence on ever-expanding populations, debt, and resource exploitation. He is author of several books, including the best seller, "Survive the Economic Collapse.”

In the first hour, we touch on the recent Paris killing rampage and the tactics that make these terroristic events possible. Piero points to the ruling Western oligarchy’s meddling in Middle Eastern oil interests as a key piece of the puzzle. We discuss the tribal nature of the people being extruded by the millions from this battle-weary region, along with the engrained brutality that is completely foreign to most Europeans. Piero explains how we are at the beginning of the final fall of the global economy operating for the past 70 years, and he says the Western way of mass consumerism and instant gratification has created several generations of weak people ripe for conquering. We analyze the mainstream media’s fueling of identity politics that has served to further divide an already atomized society. Then, Piero emphasizes how the hollowing out of morals through the implantation of ideologies like feminism and cultural Marxism is the nexus of what’s to come in the collapse. We consider the perfect storm that has been created by the exponential growth of the world’s population, paired with a global economy based in dwindling resources and debt, and compounded by the corrosive effects of mass immigration into a complex and fragile system.

In the second hour, we continue looking at the potential variables of an economic collapse, including decreasing oil production, scarcity of nutritious food, and a lack of potable water. Piero illustrates how the US government’s disastrous foreign policy and financing of its military industrial complex fully demonstrates the magnitude of the crisis at hand. Then, he breaks down the way to conceptualize a global financial collapse and how to prepare by getting rooted in both the physical ground and one’s own traditions and culture. Piero covers seven elements for developing autonomy and living a sustainable way of life: securing a water source, growing food, practicing self-reliant hygiene and health, understanding energy technology, honing skills/knowledge and preserving culture for future generations, defense of self and family, and building strong social bonds.

Tom Petty And The Heartbreakers - I Wont Back Down 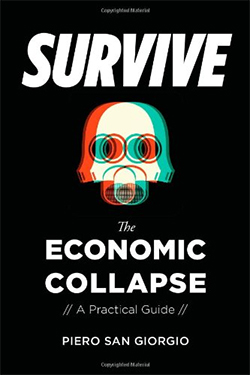