Sweden, Get Ready for the Collapse

Ingrid Carlqvist worked in mainstream media for many years, before starting Dispatch International with Lars Hedegaard, in 2012. She is now a Distinguished Senior Fellow writing for Gatestone Institute. Conrad is a former leftie who currently is working on his bachelors degree in political science. For the past five years he's been preoccupied with the thought of the destruction of Sweden. He has appeared on various podcasts and co-hosts "Ingrid & Conrad."

Ingrid and Conrad join us for a conversation about the absurd and failed multicultural experiment that is pushing Sweden to the brink of collapse. We discuss the pressure that the recent migrant invasion is placing on Sweden’s infrastructure and its most vulnerable native populations. As the new Prime Minister relentlessly pushes for Sweden to ‘take responsibility’ for the refugees that are flooding into Europe, a collective cognitive dissonance prevents Swedes from grasping the full reality of inviting the perils of Islam to an already crowded and dysfunctional doorstep. Conrad underscores how the good intentions of politically correct Swedes are being exploited by Muslims with serious superiority complexes and a deep disdain for Westerners. We consider why law enforcement has been stunted and corrupted by fear, while an extreme climate of conformity keeps citizens from rising up and fighting the insanity, and how the mainstream media drives this senselessness with emotionally driven propaganda.

In the second half, we look at the programmed complacency and White guilt that hijacks any legitimate journalism from exposing the terrible truths surrounding Sweden’s dispossession and transformation to a multicultural society. We discuss how conflict is being manufactured to divide the unifying cultural fabric of Sweden, creating a land Ingrid calls Absurdistan, which encourages citizens and immigrants alike to nurse from an ineffective welfare and benefits system. We talk about the self-hating, neo-religious crusade that is propelling a political dialogue touting that Swedes don’t exist as a native people, and how this loss of faith is hurdling the nation towards a full on disaster. Then, we weigh up what it will take for Sweden to unite and fight to preserve and maintain the successful, functioning society that has attracted so many foreigners to line up for a piece of the pie. Henrik speaks about building a social network that will help people organize, connect on a geographical basis, and form societies that can regain control of Sweden. Later, we delve into the ridiculous gender dysphoria programming of the LGBT movement that is corrupting innocent children, slighting nature, and poisoning traditional nuclear family ideals. 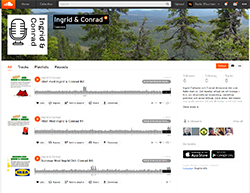