Swedish street artist Dan Park faced two prison sentences because of his provocative street art. He was accused of denigration of “folkgrupp,” which is the Swedish term for specially protected segments of the population, such as Muslims, Gypsies, homosexuals and women – but not the original Swedes nor men in general. Both sentences were given for the same pictures. During the first court case, Park had uploaded pictures on his blog to tell his fans what was going on - before any sentence was given. He received another prison sentence for doing that. The court thought that Park had to be locked up because he was having a high risk of repeating the "crime." The prosecutor even demanded a psychiatric assessment to be performed on Park. Dan will tell his story of being jailed for his artwork in a country that professes to uphold freedom of speech. We’ll discuss how any viewpoint that opposes the left is deemed offensive and racist. Dan points out the hypocrisy and lies coming out of “tolerant” Sweden. Left violence against Nationalists and free speech is rampant. Henrik Rönnquist, an art gallery owner who shows Dan’s artwork and also Lars Vilks, who has received death threats for his drawings of Muhammad, also joins the conversation. Since he has shown the artwork of Dan and Lars Vilks, he has been threatened, harassed, had his emails hacked, lost friends and does not go out after dark in fear of his life. We’ll talk about art censorship, Sweden’s fascist society and the union of the left with Islam in all its contradictions.

galleristen.se
Some of Dan's artwork
Swedish prosecutor takes a page from the Soviet manual - Artist might be declared insane, to have him committed
ronnquist.com 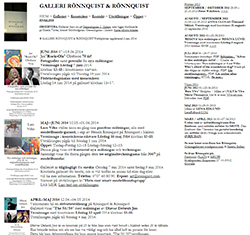