Apr 22, 2015
Patrick Wood is an author and lecturer who has studied elite globalization policies since the late 1970's, when he partnered with the late Antony C. Sutton to coauthor Trilaterals Over Washington. Patrick is with us to introduce his latest book, Technocracy Rising: The Trojan Horse of Global Transformation. This follow-up to his works on the Trilateral Commission details how the organization quietly adopted a modified version of historic technocracy to craft a movement it called a “New International Economic Order.” Patrick outlines where the technocracy movement took root, and how this ideology ended up producing programs such as Sustainable Development, Agenda 21, Green Economy and Smart Growth. He defines the technocratic economic system that was born during the 1930’s Great Depression, designed to replace capitalism’s price based system with an energy based system and currency. We discuss the philosophy at the heart of technocracy, envisaging how this “rule by experts” becomes problematic when a few select people take over a movement and manipulate it for their best interests. We compare technocracy to transhumanism and scientism, with common threads ultimately leading to a scientific dictatorship masked as a utopian dream. In the members’ hour, Patrick emphasizes the core of transhuman values, which are based in completely transcending the human condition. Then, he explains the five requirements of technocracy and how mass surveillance and data fusion programs already in place are the first steps to implementing a worldwide digitized control system. We discuss the banking industry’s role in the transformation of the current economic system and the shady opportunities that could arise with the destruction of the free market. Further, we look at the scam of environmentalism and the 1992 Earth Summit conference that produced the Agenda 21 document. We also connect the dots to the war on self-determination that is being waged through educational programs like Common Core. We wrap up with an analysis of the overextended state of our financial world, with the ever-present members of the technocratic elite pushing capitalism to its limits.

technocracyrising.com
augustforecast.com
Data fusion
What Happens To Privacy When The Internet Is In Everything?
Christiana Figueres
Gro Harlem Brundtland
Trilaterals over Washington
Trilaterals Over Washington
trilateral.org
Council of governments
Enclosure
Professional-managerial class
EUR-Lex

On Earth As It Is In Heaven 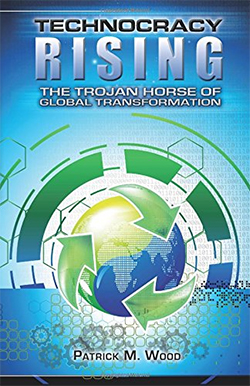