Aug 21, 2015
Darrell Y. Hamamoto is a professor of Asian American Studies at the University of California, Davis. He is the author of a handbook directed to college and university-age youth disillusioned with academic orthdoxy and political correctness titled “New World Order Theory For Students.” Darrell describes the politically oppressive environment at UC Davis where, like most institutions of education, cultural Marxism in all of its politically correct forms is relentlessly promoted to students. He talks about how a particular Asian American servitor of empire achieved the ushering through of California’s senate bill 277, removing personal exemptions for vaccine requirements of children. Darrell relates how this type of policy making extends to immigration concepts and rulings that are designed as means for the NWO to gain technocratic control of US citizens by blending out sovereignty. Then, we discuss issues related to Japan’s shifting demographics, including the feminization of men and the affinity for artificial intelligence and robotics that came as a response to the country’s lack in reproduction. In the members’ segment, we bounce back to the subject California’s mandatory vaccination bill and the rising opposition that is exposing the mad vaccine regime and faulty science, resulting in a major threat to the tyrannical medical system. Then, we get into artificial intelligence and robotics technologies that are being used for social control experimentation on children via seemingly innocuous toys called ‘relational artifacts.’ Later, we take a look at the inundation of pornography and oversexualized propaganda currently flooding the internet, including the newly popular ‘Hijab porn.’ Hamamoto postulates that the virtual porn trend is a gateway for the rollout of ‘pleasure robots’ as well as the removal of traditional sensuality and sexuality, which he says is part of a larger process of draining out the instinctual drive of men to defend territory and achieve success.

Servitors of Empire: Studies in the Dark Side of Asian America

The Dark Side of Asian America & Weaponized Political Correctness 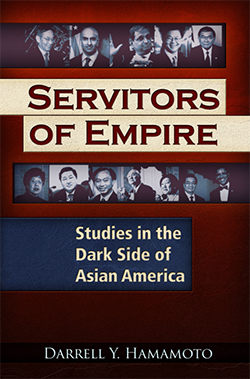