The Church of Global Warming

Jan 21, 2010
James Follett’s profession is within the Energy Industry and for the past 10 years he has been employed by a Renewable Energy company. His formal role has been as a Business Analyst with expertise in the design, creation and management of business risk models specifically related to Finance, Portfolio and Trading. He studied Natural Sciences at Cambridge University and then worked as a Neuroscience researcher at the Free University of Berlin. He has worked in various financial companies in London and now Sydney since 1995 as a financial modeler and IT developer. James produced the film "Church of Global Warming" and runs the website climatereview.net. In this program, he discusses his film and the research around it. The "Church of Global Warming" is a well made documentary that explores the science, origins and economics behind global warming, cap & trade and examines the claims from both sides of the climate change/global warming camps. Topics Discussed: Cambridge, natural science, Martin Durkin, The Great Global Warming Swindle, carbon trade, the Al Gore graph, temperature regulates CO2, Michael Mann "hockey stick" graph, climate audit, Steve McIntyre, climate consensus, IPCC, follow the money, another Y2K bubble, political left, socialism, bio fuel, stopping industrialization, starvation, one world government, the new green economy, carbon tax, cap and trade, new technologies, cold fusion, one world government, Church of Global Warming, religion, tribalism and more. We continue for a second hour for Red Ice Members and discuss the surface temperature stations around the US, tree rings, the influence of the sun, cosmic rays, cloud formation and weather manipulation. Then, we talk about CO2 being classified a pollutant by the EPA (Environmental Protection Agency). What is that all about? We talk more about new technology and the huge about of money going into climate computer simulations. Is this money well spent? We round the interview up talking about real environmental problems as well as the emergence of a one world government and how the EU has been developing the legal frame work that will be adopted by the planned future world government. Don't miss this important program with James Follett. Topics Discussed: surface temperature stations, surfacestations.org, urban heating effect, science, tree rings, bristlecone pines, the Sun, cosmic rays and cloud cover, Henrik Svensmark, The Chilling Stars, cold snap, CO2 classified as a pollutant by the EPA, Al Gore and the IPCC received the Nobel Peace Prize, weather manipulation, true environmental problems, "green" light bulbs, the human environment, volcanoes, methane from animals, how much CO2 do we put Into the atmosphere, money spent on research, one world government, European Union and more.

Al Gore Admits CO2 Does Not Cause Majority Of Global Warming

The Sun Defines The Climate

The truth about global warming - it's the Sun that's to blame

The Really Inconvenient Truths: Seven Environmental Catastrophes Liberals Don't Want You to Know About--Because They Helped Cause Them 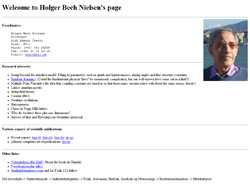