The Crisis in Ukraine & The Geopolitical Chess Game

Paul Craig Roberts has had careers in scholarship and academia, journalism, public service, and business. Roberts is probably best known for being the Assistant Secretary of the US Treasury for Economic Policy in the Reagan Administration. He was associate editor and columnist with the Wall Street Journal, columnist for Business Week and the Scripps Howard News Service. He is a contributing editor to Gerald Celente's Trends Journal. He is the author of numerous books, including his most recent, How America Was Lost: From 9/11 to the Police/Warfare State. He is currently chairman of The Institute for Political Economy. In this program, we discuss the neo-con’s war agenda and how the Ukraine fits into the Wolfowitz doctrine. We talk about the violent Coup d'état in Kiev and who has been the driving factor behind the illegitimate takeover of the country. Paul also discusses the inconsistencies in the various political factions that have been helping each other in order to take control of the Ukraine. Washington’s willingness to work with anyone, including criminals, in order to achieve their goals is no big surprise but is speaks volumes about their ambitions to remain in power. Later, we discuss Putin’s Russia and how vastly different the roles are today, than just 25 years ago and what the grudge between the west’s elite and Russia is about. Paul explains how the USA is losing more and more influence around the world. He paints a picture of no more superpowers and what power dynamic will replace it. Later, we discuss the future of the American dollar, multicultural madness in Europe and the next step in the geopolitical chess game. 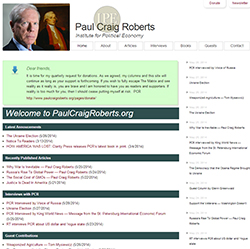