Mar 27, 2015
Aleksandr Dugin is one of the best-known writers and political commentators in post-Soviet Russia. In addition to the many books he has authored on political, philosophical and spiritual topics, he currently serves on the staff of Moscow State University, and is the intellectual leader of the Eurasia Movement. For more than a decade, he has also been an advisor to Vladimir Putin and others in the Kremlin on geopolitical matters, being a vocal advocate of a return of Russian power to the global stage, to act as a counterweight to American domination. Dugin joins us to speak about the subject of his book, The Fourth Political Theory. He begins with an overview of this political vision, one that is a fundamental criticism of liberalism in all forms, but does not fall into communism, nationalism or fascism. Dugin explains the need for critically thinking people in the world to imagine an alternative to liberalism, and how this very confusing and destructive ideology is truly a totalitarian way of thinking. We consider the key liberalist issues as being tests to see how far people are willing to go to completely give up traditional values, and we look at the globalist capital system that is exacerbating the identity crisis of the west. In the second half, Dugin details the fine points of Eurasianism, a vision of world history based on geopolitics and the virility of diverse civilizations. We look at Russia’s place amongst the global elite, her unwavering sovereignty that will ultimately resist globalization, and a deeply rooted cultural dimension that cannot be divided from Europe. Dugin speaks of the US’s constant meddling and manufacturing of conflicts between Russia and Europe, and we discuss the importance of creating a strong European cooperative to balance the liberalist power monopoly. In conclusion, Dugin notes his contributions to Putin’s current ideology and the rising influence of the Forth Political Theory in liberating Russia from the globalist grip.

4pt.su
arktos.com
On Eurasianism, the Geopolitics of Land and Sea, and a Russian Theory of Multipolarity
Glenn Beck's hit piece on Aleksandr Dugin (See comments also)

The Fourth Political Theory
Putin vs Putin
Eurasian Mission: An Introduction to Neo-Eurasianism
The Eurocentric Conception of World Politics 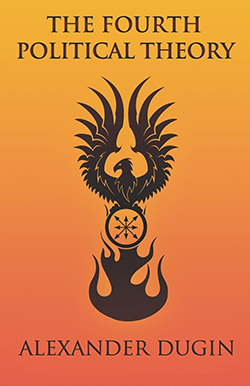