The Hammer and the Cross: Vikings and Christianity

Dec 12, 2014
Robert Ferguson is an author from the United Kingdom, where he completed the Scandinavian Studies program at University College, London, specializing in Norwegian. He eventually emigrated to Norway where he began his literary career as a radio dramatist, writing eleven original radio plays and going on to write several biographies, two histories of the Vikings, and two novels. Robert joins us to speak primarily about the topic of his latest book, The Hammer and the Cross: The New History of the Vikings. We begin our discussion with a look back to when the Viking era began, which coincides with the rise of the Charlemagne Empire and the forcible conversion of the Saxons to Christianity in the late Iron Age. Robert explains how the Scandinavians revolted when Christianity began to take hold in Northern Europe and the Heathen culture was being annihilated, resulting in the outbreak of the Viking Era. Then, Robert talks about the conversion to Christianity, an accepted modernization process that took advantage of the lack of dogma and unifying word of worship in Heathenism, leading to the control and institutionalization of Pagans. In the second hour, we consider the most trusted sources for Viking Age history, the etymology of Viking place names, and the oral history that defined these peoples. Robert elaborates on the societal changes that occurred with written law and the recording of history. In conclusion, we reflect on the rich culture of Heathenism with its history of violence, strength and honor. We also speculate about the location of the great Heathen temple, which was destroyed in 1080, marking the beginning of the end of the Viking Age.

The Hammer and The Cross: A New History of the Vikings by Ferguson, Robert (2010) Paperback 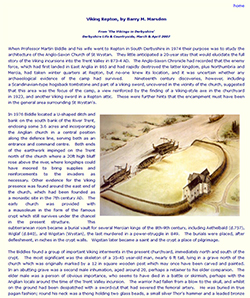