The History of Jewish Influence

Andrew Joyce PhD is a scholar, speaker and writer with academic expertise in immigration, ethnic and religious conflict, and philosophy. Andrew sits on the Editorial Advisory Board of The Occidental Quarterly and is a regular contributor to The Occidental Observer. He also serves the British Renaissance Policy Institute in an advisory capacity and will be producing and editing a new journal for BRPI. He is in the final stages of preparing for publication Talmud and Taboo: Essays on The Jewish Question.

Dr. Joyce joins us for another critical look inside the history and events that continually lead us back to the immense Jewish question. To begin, Andrew highlights his academic journey and how he arrived at tackling the vast obstacles embedded within our propagandized Western history to get to the truth of Jewish influence. We discuss their role during the Middle Ages as middleman merchants in close alliance with the elite powers that be, when the practice of usury transformed the means by which Europe was expanded and consolidated. Andrew explains some misconceptions about Jewish emancipations during the medieval period, many of which were influenced by the weakening of monarchal power and the rise of parliamentary democracy in host nations. Then, we consider how the Jewish proclivity of exploiting weaknesses within the flawed democratic system, their fierce ethnocentricity, and deep fear of being racially and genetically disseminated has compelled them to intensely strategize against gentiles. Andrew talks about the cycle of greed within the monarchy system that led to numerous Jewish expulsions and the clever maneuvers that repeatedly brought them and their money back into the untouchable ruling elite fold. We also look at the current calamity of governmental errors driving Europeans to extinction and how Jews have contributed in shaping the demographic suicide of the West.

In the members’ half, we address the concern that there tends to be an unhealthy obsession with the JQ and how we can study our own weaknesses in terms of damaged ethnic cohesion in balancing this weighty issue. Dr. Joyce stresses that we must find rational ways to communicate to the average citizen how our deprived sense of historical peoplehood coupled with the barrage of guilt inducing MSM and academic programming is leading us to the slaughter. We talk about the great power of face to face persuasion and leading by example, along with using humorous memes and trolling in encouraging our folk to adopt a sense of nationalistic pride. Then, Andrew illuminates how Jews have used a backdoor trial and error approach to slowly infiltrate special interest groups aiming to clamp down on freedoms to criticize detractors, and we look at what a massive cultural shift might look like if Whites can employ that same diligence in reversing the pathologically blind response to their destruction. Further, we discuss the immense responsibility that lies in safeguarding the inheritance of our future generations, which ultimately requires a strong ethnic brotherhood standing in radical resistance to the invading cultures that have no place within our own. At the end, we get into the idea that everything happening now with the push for multiculturalism in the West is just history repeating itself, and if we are to reverse this creeping genocide we must bring more awareness, raise the stakes, and adapt an attitude of total success.

Andrew Joyce at theoccidentalobserver.net
britishrenaissance.org
Jewish emancipation
Review: Anthony Julius’ “Trials of the Diaspora: A History of Anti-Semitism in England”
The Fall of London: Thoughts on White Dispossession
Philip Green, Jewish Criminality, and the Cost of Economic Parasitism, Part 1: The Wider Context of Jewish White Collar Crime
Review of “Final Solution: The Fate of the Jews, 1933–49”
Tyrannical Elites Criminalize Opposition to Jewish Interests 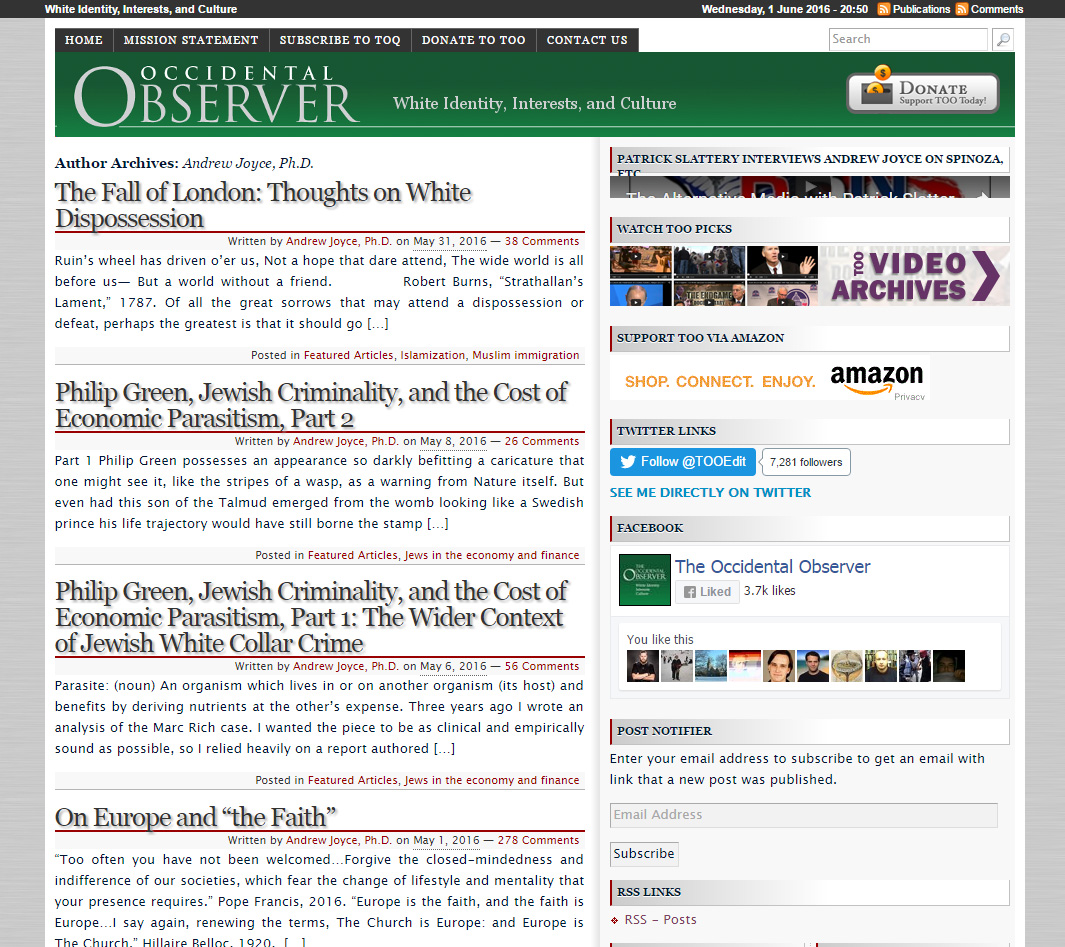