The Ills of Equality & Extreme Democracy

Dec 28, 2015
Tito Perdue was born in 1938 in Chile and he returned to Alabama in 1941 with his family. Tito graduated from the University of Texas in 1961 and spent some time working in New York City, an experience which garnered him his life-long hatred of urban life. After holding positions at various university libraries, Tito has devoted himself full-time to writing since 1983. He has seven novels published to date, and Arktos has published his novel “Morning Crafts,” along with “William’s House,” both of which are part of a four volume series.

In this dialogue, Tito begins with the story of his life and times in Alabama and the inspiration that led him to embark on a literary career. We talk about the ideologies that America was founded on, with focus on the concept of equality that was in response to what was considered oppressive aristocracy. Tito explains his views on the shift away from natural order resulting from the push for extreme democracy, and we look at the debasing of racial heritage that has degenerated the fundamental values of Western culture. We consider the universal experience of racism and the nature of the human psyche that has been repressed because of the stagnation created from obsession with excessive material wealth and the absence of true opposition and conflict. We discuss the history of cultures who have failed to rise up in resistance to invasions and we look at the undeniable dilapidation that is currently occurring in the West as the refugee incursion intensifies. Further, Tito talks about the advancement of Islam and the psychological warfare that keeps Whites from questioning the viability of multiculturalism.

In the members’ hour, we look at the impending extinction of Western culture as we know it, and Tito speaks about the extraordinary movement of national socialism in the 1930s. We get into the ills of feminism and the realities of self-segregation between differing cultures, along with the destructive transformation of America that began with the Immigration and Nationality Act of 1965. Tito emphasizes the downfalls of “diversified” civilizations and says that the globalist’s control of the media is to blame for promoting the war on Whites and the heinous policies designed to discriminate against the founding blood of the US. We also talk about propaganda-filled Hollywood movies that are destroying the true history and mythos of European culture and the anti-White emotional programming that is endorsed through academia and influential media, such as the New York Times. At the end, Tito leaves us with ideas for strengthening the New Right movement and sustaining a merchant class of our own, that will drive its successful realization.

titoperdue.com
What is the quote on the statue of liberty?
Turning the World Around:Tito Perdue’s The Node review by Greg Johnson
Immigration and Nationality Act of 1965
17 Black Gang Bangers Burned a White Girl Alive… Where Is Obama?
Marlene Dietrich
Who runs Hollywood? C'mon 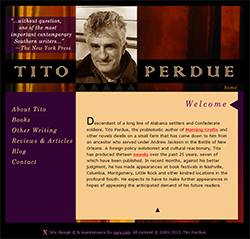