Aug 17, 2015
Angelo John Gage is a political activist who is fighting against Marxism in all its abominable forms. A former US Marine, Gage went on to graduate from the International Center for Positive Change and Hypnosis as a NLP (Neuro-Linguistic Programming) Master Practitioner and Conversational Hypnotist. He also chairs the National Youth Front (NYF), an anti-supremacist conservation organization dedicated to the preservation of all White people, including their nations and cultures across the globe. Angelo is with us today to share an update on some of the recent activism and events the NYF has been involved with in bringing attention to the blatant anti-White agenda. We discuss the mind control techniques and public shaming campaigns that are commonly waged by the Zionist press and media against people who bring attention to the anti-White programming of the Marxist matrix. Angelo emphasizes how in a matter of a couple generations the universities have changed their tune to a stanch chorus of White demonization - from rewriting the history of colonial times to the organization of ‘privilege’ boards - the whole system is saturated with White guilt indoctrination. Angelo describes what happened to him when a recent NYF campaign, Operation Grumpy Grundy, resulted in his expulsion from Boston University - all for standing up against the anti-White bigotry of a professor who openly accuses White college males of being a ‘problem population.’ In the members’ hour, we look at how the modern matrix has created a generation of degenerates. Angelo outlines indications that a counter revolution is on the upswing because people are rapidly waking up to the spiritual war that is reaping havoc on Western culture and identity. We talk about the forced constructs of multiculturalism and tolerance and we explore the idea that every race and religion should have their own homeland. We also get into the ridiculous social justice warrior infighting and bickering that is killing identities across the board and creating a society in constant fear of being ostracized. At the end, Angelo gives examples of NYF’s pursuit of practical politics that is geared towards countering the attack on the true history of the American people and exposing the original Masonic conspiracy to create a continent of money hungry slaves blinded by materialism and ‘diversity.’

Motorhead - Just 'Cos You Got The Power 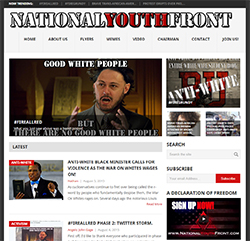