The Myth of German Villainy

Benton L. Bradberry served in the U.S. Navy from 1955 to 1977 during the Cold War. He is a graduate of the Naval Post Graduate School in Monterey, California with a degree in Political Science and International Relations. Bradberry’s generation was inundated with anti-German propaganda and “Holocaust” lore and he spent years researching “the other side of the story,” which is compiled in his book, “The Myth of German Villainy.”

Mr. Bradberry begins by describing some of the typical anti-German propaganda he encountered along the way in Europe during his Navy years and in recent travels – a vile and evil picture so different from the true character of the highly civilized and cultivated German people he discovered. Benton explains how WWI and WWII were thrust upon Germany, who was surpassing the Allied powers in technology, science and medicine, in an effort by Britain, France and Russia to destroy their mutual rival. We get into the Zionist funding that helped ensure the US presidency for Woodrow Wilson, which was the beginning of the anti-German propaganda campaign that led to America declaring war on Germany. Bradberry highlights the saga of the Communist Bolshevik Revolution that was instigated by Lenin and Trotsky, and he details just how deeply embedded the Jewish faction was in the Red Terror that left roughly 40 million Russian Christians dead. Then, we touch on the communist Spartacist uprising, the Versailles Treaty, and the British imposed starvation blockade that forced Germany to resort to drastic measures.

In the members’ half, Ben breaks down how the highly cohesive minority of Jews managed to take over the Communist party, and the banking industry, and become overwhelmingly overrepresented in every institution and profession during the chaotic years when Germany’s economy was destroyed. We discuss Hitler’s election to chancellor and his promise to restore Germany for the Germans, and how he won over the hearts and minds of his beloved countrymen, women and children. Benton explains the declaration of holy war against Germany by the international Zionist movement, and we go over the 25 policies of the National Socialist movement. We consider the incredible challenges Hitler faced in rebuilding Germany and the extreme actions that were employed in order to purge the country of its corrosive elements. Then, we look at the events surrounding the Polish corridor land dispute and the start of WWII, the fake pretexts that pitted France and Britain against Germany, and the big picture of the grisly carnage of Germany after the war. At the end, we turn our thoughts to the current refugee situation in Europe, Merkel, Trump, and the war on Whites.

The Anthem of National Socialist Germany 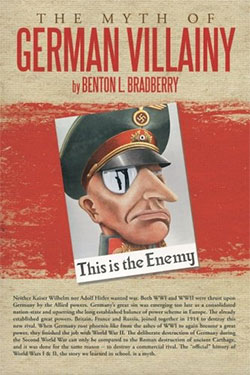