The Orion Mystery & The Invisible College

Mar 12, 2009
Adrian Gilbert is the author or co-author of a number of best selling books, including The Orion Mystery, The Mayan Prophecies, Magi, Signs in the Sky and The End of Time. For nearly forty years he has been following the path of gnosis, i.e. knowledge of the truth concerning the universe and man’s possibilities within it. This has taken him all over the world, exploring diverse cultures and philosophies. In the first hour of this program, Adrian talks about ”The Orion Mystery” and The Invisible College. Topics Discussed: the sun, galactic alignments, Venus, phi ratio, Newton, Bodes law, electric universe, Egyptology, pyramids with Orion's Belt, Westminster Abbey, City of London, Temple of Apollo, ancient Britain, Britain and Troy, Brutus of Troy, The Brutus Stone in Totnes, Britain pre-history, Trinovantum, pyramid shaft, Rudolf Gantenbrink, Zahi Hawass, Edgar Cayce, A R E, the hall of records, clairvoyant, Rosicrucians, natural philosophy, the new Jerusalem, JJ Hurtak and much more. In our second hour for members, we continue talking the connection between the star constellation Orion, the Mount of Olives and the Great Pyramid. We also talk about the opening of the Orion stargate. Adrian says we are in a time period where potential new possibilities related to consciousness and awareness of people is opening up. Then, Adrian talks about the clairvoyant that was sharing information with him about what possibly could be behind Gantenbrink's door, the door at the end of the shaft inside the Great Pyramid. Topics Discussed: golden hawk Horus, Isis and Nephthys, resurrected Osiris, the mystery of the pyramids, the alien theory, megalithic sites around the world, Stargate the Film, evolution, DNA, protein building blocks, entropy, energy, creativity, computer analogy, the web, knowledge, Hermes, apocalypse of St John, the mind of God, Orion, the ecliptic, Gemini, Taurus, souls passing, solar system, June 21st, gateway, belt of Orion, Mount of Olives, Mintaka and signs in the sky.

Signs in the Sky 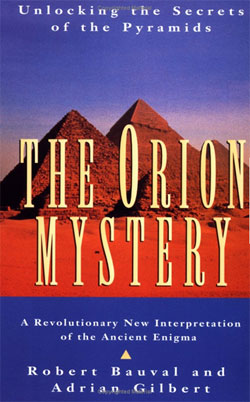