Laurence Gardner (17 May 1943 – 12 August 2010) was a writer and lecturer in the "alternative history" genre of research. Laurence Gardner's first book “Bloodline of the Holy Grail” was published in 1996. The book was a best seller. He used his books to propose several theories, including a belief that Jesus and Mary Magdalene had married and had children, whose descendants included King Arthur and the House of Stuart. In “Lost Secrets of the Sacred Ark” he claimed that the Ark of the Covenant was a machine for manufacturing "monatomic gold" - a supposed elixir which could be used to extend life. His books also included theories about Freemasonry, the Knights Templar, The Holy Grail and proposed connections between Atenism and Judaism. In this program, Laurence Gardner talks about "Bloodline of the Holy Grail", the hidden lineage of Jesus. We also talk about his books, “The Grail Enigma: The Hidden Heirs of Jesus and Mary Magdalene” and “Genesis of the Grail Kings: The Explosive Story of Genetic Cloning and the Ancient Bloodline of Jesus”. For our members, Laurence discusses the amazing revelations of the incredible power of gold. Additionally, he talks about the Annunaki and their bloodlines. Who were they and where did they come from?

Society of Antiquaries of Scotland

Inside The Brotherhood (Video)

Book of the Dead

Lost Secrets of the Ark

Bloodline Of The Holy Grail

Genesis Of The Grail Kings

Realm Of The Ring Lords

Lost Secrets Of The Sacred Ark 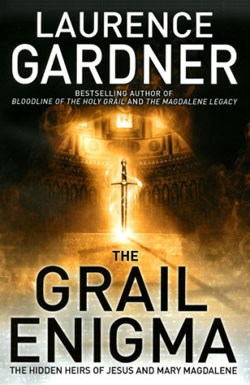