The Secret Life of Uri Geller

Mar 10, 2014
For over 4 decades, Israeli born Uri Geller has been known for demonstrating telepathic and intuitive abilities and psychokinesis. He is well known for his trademark television performances of spoon bending. Gellar has been studied by the world's leading scientists and has worked with the FBI, CIA and Mussad. Uri has lectured to Prime Ministers, Presidents, United Nations delegates and CEOs of large multinational companies. We’ll discuss the BBC film, “The Secret Lift of Uri Geller,” which explores his work for intelligence agencies on three continents for 30 years. The program was based on newly declassified information, featured interviews with former intelligence personnel, and contained actual footage from CIA tests. We’ll hear about the other side of Uri Geller, not the one camouflaged as an entertainer. Uri opens up about his abilities, how he does what he does and what kind of secret missions he worked on for government agencies around the world. We ask him why he is coming out publicly with this information. He’ll talk about remote viewing, experiments at secret paranormal research labs and otherworldly entities. We also talk about the skeptics who try to debunk him. In the member’s hour, we’ll hear more about his work for the CIA and Mussad. Uri talks about psychics, intuitives and remote viewers being used for government intelligence. He says there is no doubt that UFOs, aliens and time travelers are all real. Later, we question the attack on 9/11. Geller gives his view on terrorism and his concern for a future nuclear attack. 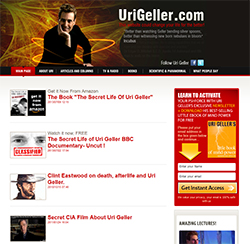