The Singularity Will Not Occur, Programmed Reality & Infomania

Jan 25, 2009
Jim Elvidge holds a Master’s Degree in Electrical Engineering from Cornell University. He also holds 4 patents in digital signal processing and has written articles for publications as diverse as Monitoring Times and the IEEE Transactions on Geoscience and Remote Sensing. For many years, Elvidge has kept pace with the latest research, theories, and discoveries in the varied fields of subatomic physics, cosmology, artificial intelligence, nanotechnology, and the paranormal. He is also the author of, "The Universe Solved". He returns to the program to discuss the evidence of our reality being programmed. Also, he talks about ”Infomania ”and the theory that technological singularity will not occur. We also discuss the news about the GEO600 gravitational wave detector in Germany, the limits of spacetime resolution and the proof that we're living in a hologram. Topics Discussed: the fine tuned universe, "reality doesn't exist", locality and non-locality, quantum mechanics, the singularity, Ray Kurzweil, Jaron Lanier, AI, brain computer interfaces, Moore's Law & evidence that the exponential trends are flattening, information consumption, email interruptions and much more. In our second hour for members, Jim talks about information filtering, quantum computers, biological computers, teleportation and the power of 10. We'll also talk about the brain as the decoder of reality, the idea that reality does not "happen" until it is observed. We also explore into the idea that our reality is pre-programmed. Who or what is the programmer? Other Topics Discussed: new discoveries in science leading to greater understanding about the human being and the human soul, the importance of open minded research, how observation affects scientific experimentation and replication. Don’t miss this excellent interview!

The Singularity, Infomania, and Programmed Reality

Twenty Percent Chance we are All Just a Virtual Simulation

Are we Living in a Simulation, a Programmed Reality? 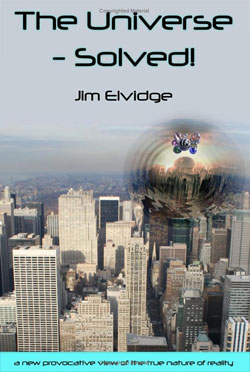