The Untold History of the Enslavement of Whites in Early America

Sep 24, 2014
Michael Hoffman is a former reporter for the Associated Press and the author of six books of radical history, journalism and literature. He describes himself as a "heretical writer." Hoffman is also the managing editor of the newsletter Revisionist History. We’ll discuss his book, They Were White and They Were Slaves: The Untold History of the Enslavement of Whites in Early America. First, Michael shares his inspiration for writing this book and why it is important to highlight this dark corner of suppressed history. He’ll tell of a hidden epoch, the slave trade of Whites, hundreds of thousands of whom were kidnapped, chained, whipped and worked to death in the American colonies and during the Industrial Revolution. We’ll learn about the artificial creation of the underclass and the emergence of the pauper class in England, which led to abduction into slavery. Michael explains how many poor Whites were taken from the British Isles and sent to America for slave labor against their will. He also elaborates on the false narrative surrounding indentured servitude. Additionally, we talk about how the cover-up of White slavery has impacted race relations today. Later, we talk about other historical aspects of slavery that are not discussed. In the second hour, we’ll discuss how the exclusion of politically incorrect aspects of history remains closeted and what must be done about it. Then, Michael talks about the Judas factor among White elites. Where is the yeoman resistance? We’ll also discuss the emergence of the idea of racial supremacy found in Judaic doctrine. He’ll explain the difference between self defense and racial supremacy and how it’s relevant today. Later, Michael comments on the root of White European problems. At the end, we return to White slavery as Hoffman explains the gradual transition from slavery to contractual servitude and he reminds us of the White slaves who were forcefully send to Australia.

They Were White and They Were Slaves: The Untold History of the Enslavement of Whites in Early America
White Cargo: The Forgotten History of Britain's White Slaves in America
More of Michael Hoffman's books 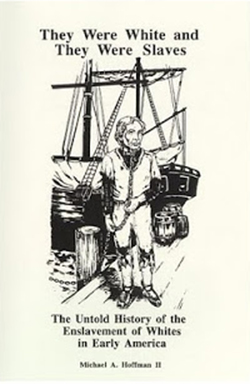