The Vatican Behind the Creation of Islam, Sovereign Military Order of Malta, Freemasonry & Le Cercle

Jul 20, 2008
Eric Jon Phelps defines the 500-year Jesuit conspiracy to bring the entire world into a One-World Government, economy, and religion, all controlled by the Jesuit Pope. Author of “Vatican Assassins”, Eric Jon Phelps is back on the program to discuss “The Vatican Creation of Islam”. We move though history and talk about the connections between the Vatican, the Jesuits, terrorism, Nazis, Al- Qaida and the Muslim brotherhood. We also discuss the 9/11 aftermath, the USA PATRIOT Act, Viet D. Dinh, Georgetown University and much more. For our members, we talk about the difference between Catholic and Protestant orders. We discuss the Sovereign Military Order of Knights of Malta (widely considered a sovereign subject of international law), Knights Hospitallers (the organization became a religious and military order under its own charter, and was charged with the care and defense of the Holy Land.), Order of St John, Knights of Rhodes and the Teutonic Knights, a German Catholic religious orders formed to aid Christians on their pilgrimages to the Holy Land. Later, we talk about the expanding EU dictatorship under the rule of the Vatican. We discuss the Vatican drug trade, the war in Afghanistan and the opium production. More Topics discussed: SMOM, the Freemasonic York Rite, Knights of the Temple of Solomon, Napoleon, The SS, Himmler, Afghanistan, control of the population, the international banking system, Manchu's, Chinese dynasties, race separation, the ruling elite, the moral dilemma of privacy vs. transparency, Andrew Bertie, Matthew Festing, Giscard d'Estaing, EU constitution, Lisbon Treaty, Le Circle and much more.

How the Vatican created Islam

The Illuminati and the House of Rothschild

The Cult of the All-Seing Eye

Vatican Assassins: Wounded in the House of My Friends 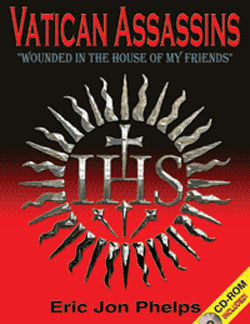