Transformers: How Federal Grant Money is Buying You Globalism

Feb 29, 2016
Sofia Smallstorm is known for the documentaries “9/11 Mysteries” and “Unraveling Sandy Hook.” Sofia is also recognized for her research on the connections between geoengineering and synthetic biology.

Sofia joins us for a discussion about the federal grant money that is paving the way to America’s future under Agenda 21. In the first half, she explains how the United States of America, the federal government and Washington, DC were incorporated in 1871, creating a federal corporation franchise system that encompasses all cities, towns and local agencies. Sofia defines what it means to for local governments to accept grant money from and do contractual business with the federal government and how this essentially adds to its trillions of dollars of debt. Sofia says this borrowed money is paying for New World Order changes that are aimed at ushering in a new version of humanity, and the migrant floods taking place all over the West are just part of the plan to exchange its current populations for a more easily controlled mishmash of genderless, raceless cogs. Then, we discuss the militarization grants being awarded to cities and towns that agree to participate in active shooter drills, and how it is possible for our commercialized government to make decisions that are not representative of the peoples’ interests.

In the members’ half, Sofia gets into the huge debt that the UN is taking on to fund its own migrant invasion, and we look at how the load of this population replacement will be dumped on the people. We talk about projections of Africa’s population quadrupling, and the fact that migration to Europe is promoted there as a way to punish the evil colonialists, which contradicts the big lie that predominately White countries will be enriched through more diversity. Further, we consider how race mixing is being marketed and endorsed in the US, and how people are being programmed to accept a world reconfigured by gender bending chemicals. Sofia emphasizes the idea that our reproductive rights could someday be handled by the same government corporation that exploits humans for funds and resources through a little contract known as a birth certificate. As our conversation rounds off, we reflect on some of the problems we face as toxic overload is permanently altering the genetic components of humans, and how to balance the autonomic nervous system for optimal health.

Smallstorm Blog
aboutthesky.com
anticorruptionsociety.com
grants.gov
Search Grants
Who is twitter-luring refugees to Germany?
'The biggest change of our time' is happening right now in Africa 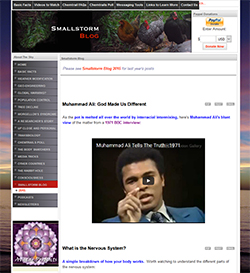