Dec 11, 2011
Anthony Sanchez talks about his book "UFO highway" and the interview he conducted with "Colonel X", an insider, about the activities and on goings at the secret Dulce underground facility under Archuleta Mesa on the Colorado-New Mexico border. We dive deep into the secret history of mankind, the greys, alien agendas and the world of black op military programs. Anthony Sanchez received his Bachelor of Science in computer information systems from Western Governors University of Salt Lake City in 2008. In addition to being a software consultant for the state of California through his own company, Anthony has been employed for 16 years as a software engineer working for 3Com, Intel, Acer, Netscape Communications, and Hewlett Packard. He became interested in UFOs in 1989, at the time "Area 51" surfaced as a public phenomenon. Since 2000 he has researched the subject matter thoroughly employing various scientific methods and hands on approaches, thus compiling over 20 years worth of UFO related research data. Each year he is a regular visitor to the deserts of the American Southwest, visiting crash sites conducting interviews, and performing scientific field work. In the second hour Anthony Sanchez talks more about the "ant people" of Hopi legend and the greys who might have helped mankind during times of cyclical catastrophe. We also hear more about the Astra Albus, the progenitors, the Illuminati, the new world order agenda and fake alien invasions. Anthony also talks about the chaos that will be unleashed in 2012 according to information he received from "Colonel X" and his own research. Later, we talk about the 1979 Dulce incident, involving a falling out between humans and the greys. Anthony tells us about Project Leonid and new technology developments related to an artificial intelligence running amok. The new world order knows about the return of the progenitors according to Sanchez. He'll tell us how he expects it to play out, weaving together black op military programs, military abductions, super soldier programs and advanced genetic engineering. 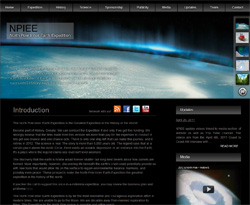