Mar 23, 2008
Walter Graham, from Downpatrick in Northern Ireland, is a campaigner against the use of wireless technology in schools. He has lobbied political parties at Stormont and district councils in his fight against the new technology he claims has yet to be proved safe. He has urged the government to force manufacturers to carry a health warning on all mobile phones following a devastating report. He made the demand after researchers found new evidence that long-term use can lead to the development of a brain tumor on the side of the user's head. Epidemiologists from five European countries found a 40pc increase in gliomas -- a type of brain tumor -- among those who had used a mobile for 10 years or more. There was also a clear trend showing brain tumor risk increased with years of use. Walter claims that there is currently conflicting information concerning the Wi-Fi system and more research needs to be done on it. In the first part of this program, we have an important discussion on the dangers of Wi-Fi (wireless internet), microwaves, cell phone radiation and electro smog. Topics Discussed: the frequency of microwave ovens and Wi-Fi, the rise of electro-smog in recent years, "Hot Spots", Orange, health issues related to cell phone towers, global coverage, schools with laptops and Wi-Fi, microwave weaponry, microwaving your food, melatonin levels, depression, blood brain barrier, mercury, toxins, DNA damage, fertility problems, male sperm count is down, cell phone radiation connected with symptoms close to Alzheimer's disease, dyeing bees, DECT phones, Faraday cage and solutions. In our members section, we continue our discussion with Walter Graham and talk about the dangers of fluoride, water fluoridation and fluoride in toothpaste. Is it good or bad to fluoridate the water? What about fluoride in toothpaste? What is the history and science of fluoride? More Topics Discussed: the math behind water fluoridation, fluoride makes you lethargic, official science on fluoride, fluorosis, bone cancer, the connection between fluoride and Atomic Bomb, aluminum industry, sulfur mining (for the farming industry), Harold Hodge, Edward Berneys, the Mellon Institute, fluoride is radioactive (traces of Uranium 238), fluoride free toothpaste, industry by-passing laws and "dumping" fluoride in the water supply, population control and the financial gain of fluoride.

Phone mast allergy 'in the mind'

Are mobile phones wiping out our bees?

The Effects Of Fluoride On The Thyroid Gland 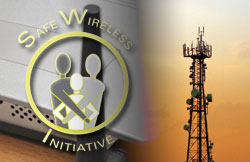