Will Sweden Sink or Swim?

Oct 9, 2015
Marcus Follin is a Swedish body builder behind the popular YouTube channel, The Golden One. He studies Economics and is a contributor at RightOn.net, an online resource for the rising True Right of Europe. Marcus joins us for a discussion about self-improvement, health, politics, Nationalism, and the sad state of affairs in Sweden.

Our conversation begins with Marcus describing how the epic heroes of his childhood inspired him embrace Nationalism. We look at the rather myopic people of Sweden, plagued with the inability to see the larger picture of the immigration invasion and the establishment’s plan for replacing their population. We discuss the common rhetoric that Europeans are inherently evil, perpetual oppressors who should be upheld to different standards than the rest of humanity. We speak about the educational system’s conspiracy by omission that is training up a whole culture of White guilt. Then, we envisage where things are heading with the refugee invasion in Sweden, and how the foreign elements coming into the native culture are weakening and eroding an already pathologically complacent people. We consider the real threat of Europe being absorbed by Islam, and Marcus stresses the importance for young Swedish men to rekindle the Viking and Goth within, to fight for their nation. Marcus illustrates how the highly atomized and hyper-individualized men of Sweden can take a page from the playbook of Middle Eastern tribalism to network and build up and a stronger sense of brotherhood.

In the members’ portion, we focus on the history of European uprising and what it will take for political parties like the Swedish Democrats to gain more support and power. Marcus emphasizes the opportunities that are presented by the country’s desperate situation, and he says that promoting economic policies that make it more feasible for working parents to raise large families are needed to resolve Europe’s sinking birth rates. Then, we shift to the Syrian disaster, America’s funding of anti-Assad rebel forces, and Russia’s recent master move against ISIS. Further, we consider the pan-European movement being pushed by the EU, with its absurd border policies that have opened the floodgates of the Middle East to effectively depopulate the area for what looks to be the benefit of Israel. We finish our conversation on the physical fitness aspect of self-improvement with weight training tips, goals, and means to maintain a respectful bond with Mother Nature.

narcissus.se
Biography on narcissus.se
YouTube The Golden One
Facebook The Golden One
Instagram The Golden One
Marcus Follin on RightOn.net
Fuck NATO and Israel. Mass Invasion of Europe. Situation in the Middle East
Irish will be an ethnic minority in Ireland by 2050
World's First Lesbian Bishop Calls for Church to Remove Crosses, to Install Muslim Prayer Space 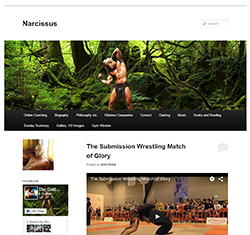