Jul 5, 2011
Adrian Salbuchi is known for speaking and writing about geopolitics, international relations, political power structures and financial globalization. Some of his books include, "The brain of the world: Globalization of World Government," and "Welcome To The Jungle: dominance and survival in the New World Order." Adrian is also the host of the Buenos Aires talk-show El Traductor Radial and founder of the Argentine Second Republic Movement. Additionally, he is an International business consultant. We're delighted to have Adrian on the show as the first guest in our series about Zionism, Israel and Multiculturalism. He begins discussing Argentina, which has suffered several major financial collapses. He'll talk about the presence of Zionists in Argentina and the taking over of Argentina's minerals and resources. Then, he clarifies what a Zionist is as not all Zionists are Jews and not all Jews are Zionists. Adrian discusses 4 different categories: Judaism, Jewish people, Zionism and the State of Israel. He tells us about the global elites' long term tactics and strategies and how the world has been trained to think only in short term. Later, we talk about powerful American lobbyists who are more concerned with Israel than the USA. We end the first hour talking about the infighting of the elites and doing the opposite of what the global elite want. In the second hour we begin to discuss Hitler and the Vatican Ratlines, an underground railroad that helped Nazis escape. Did they flee to South America? Adrian tells us about cutting edge technology that came from Argentina, including the first fighter jet and nuclear power because of the Germans living there. Then we talk about the Zionist/Nazi/Freemason connections. Is anti-Semitism and racism hyped up and invented? Adrian gives a personal example of how there is no tolerance for political analysis from all points of view, especially when it involves looking into Zionism. We'll talk about what Semitism is and who the Semites are. Then, we talk about Israel as the world government's spiritual capital. Is that where the future king of the world will be crowned? Next, Adrian explains today's psychological war and how we need to set up a counter-psychological war tactic. Later, we discuss the hot topic of multiculturalism, the Zionists role in it, forced integration, monoculture and why the elites are now attempting to destroy cultural differences. We end talking about the benefits of difference on this planet and how it awakens us to the cosmic view.

Barbara Spectre in Sweden head of Paideia on Multiculturalism

The Jewish Community of Sweden 2010 - Israel Up Close

Zionism in Sweden - How Zionists Divide and Conquer

former Israeli minister on calling people anti-Semitic - "It's a Trick, We Always Use It." 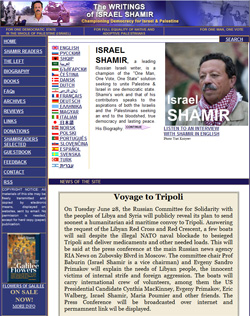