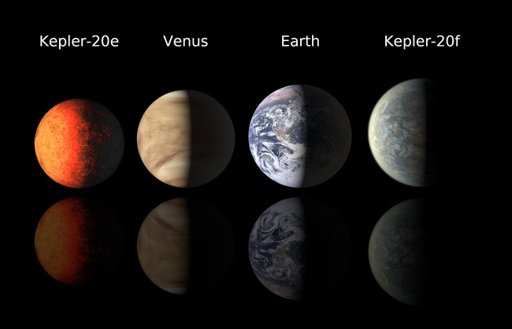 This illustration provided by the Harvard-Smithsonian Center for Astrophysics shows artist’s renderings of planets Kepler-20e and Kepler-20f compared with Venus and the Earth. They’re the smallest planets found so far outside the solar system. Scientists are seeking Earth-sized planets as potential homes for extraterrestrial life, said Fressin, who reports the new findings in a paper published online Tuesday, Dec. 30, 2011 by the journal Nature. (AP Photo/Harvard-Smithsonian Center for Astrophysics)
The discovery shows that such planets exist and that they can be detected by the Kepler spacecraft, said Francois Fressin of the Harvard-Smithsonian Center for Astrophysics in Cambridge, Massachusetts. They’re the smallest planets found so far that orbit a star resembling our sun.

Scientists are seeking Earth-sized planets as potential homes for extraterrestrial life, said Fressin, who reports the new findings in a paper published online Tuesday by the journal Nature. One planet’s diameter is only 3 per cent larger than Earth’s, while the other’s diameter is about nine-tenths that of Earth. They appear to be rocky, like our planet.

But they are too hot to contain life as we know it, with calculated temperatures of about 1,400 degrees and 800 degrees Fahrenheit (760 Celsius and 425 Celsius), he said.

Any life found on another plant may not be intelligent; it could be bacteria or mould or some completely unknown form.

Since it was launched in 2009, NASA’s planet-hunting Kepler telescope has found evidence of dozens of possible Earth-sized planets. But Fressin’s report is the first to provide confirmation, said Alan Boss of the Carnegie Institution for Science in Washington. He’s a member of the Kepler science team but not an author of the paper.

The researchers ruled out a possible alternative explanation for the signals that initially indicated the planets were orbiting the star Kepler-20. The star is 950 light-years from Earth in the direction of the constellation Lyra.

The planets, called Kepler-20e and Kepler-20f, are part of a five-planet system around the star, and their location challenges current understanding of how planets form, scientists said. In our own solar system, the small rocky planets are closest to the sun, while gaseous giants are on the periphery. But the five-planet system has no such dividing line; big and small planets alternate as one moves away from the star.