Sep 4, 2012 By Henrik Palmgren | redice.tv
On 29 August the London 2012 Paralympic Games Opening Ceremony, themed ‘Enlightenment’, took the audience on a journey of discovery through the realm of ideas, science and creativity.

Co-Artistic Directors Bradley Hemmings and Jenny Sealey put on a spectacular celebration of the inspirational spirit of the Paralympic Games to challenge perceptions of human possibility. It was narrated by Professor Stephen Hawking and featured deaf and disabled performers as well as more than 3,000 volunteers. 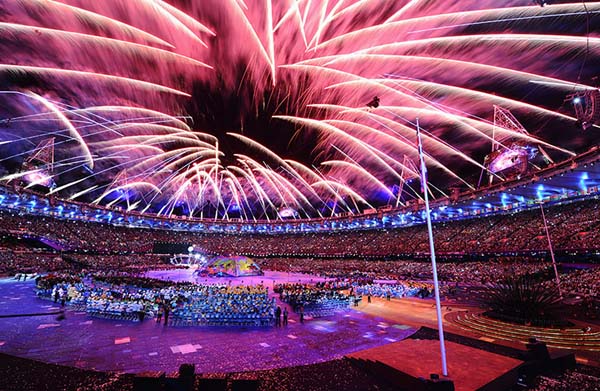 "Enlightenment" was the theme, physicist Stephen Hawking the guide and Olympic Stadium the venue Wednesday night as London welcomed 4,200 athletes from more than 160 nations to the 2012 Paralympic Games.

Who better to greet Paralympians than a scientist who has shown the world that physical disabilities do not limit human potential?

"The Paralympic Games is about transforming our perception of the world. We are all different, there is no such thing as a standard or run-of-the-mill human being, but we share the same human spirit," said Hawking, who was given two years to live in 1963 after he was diagnosed with motor neurone disease.

"What is important is that we have the ability to create ... however difficult life may seem, there is always something you can do and succeed at," he added.

The extravaganza, directed by Bradley Hemmings and Jenny Sealey, was billed as a voyage across "a sea of ideas" - including Isaac Newton’s discovery of gravity, the force that all Earth-bound athletes strive against. The show included 73 deaf and disabled professional performers and 68 disabled people among its 3,250 volunteers.

The gala opened with a look at the Big Bang - considered the beginning of the universe - as a glowing sphere turned the stadium into a giant nebula.

As the athletes paraded in under a full moon, a huge roar filled the stadium for South African flagbearer Oscar Pistorius, the sprinter who is making history by running in both the Olympics and the Paralympics this year. Glittery ticker tape and a standing ovation then greeted the enormous British team as they entered to the David Bowie song "Heroes."

The parade took nearly an hour longer than expected, with athletes arriving in dozens of ways. Some came in motorized carts, others wheeled themselves in, still others were pushed by coaches or volunteers. They walked in with canes or crutches, eye patches and sunglasses, prosthetic limbs and walking sticks, determined to make it around the imposing stadium, welcomed by a global music mash-up by local DJs.

Read the full article at: castanet.net 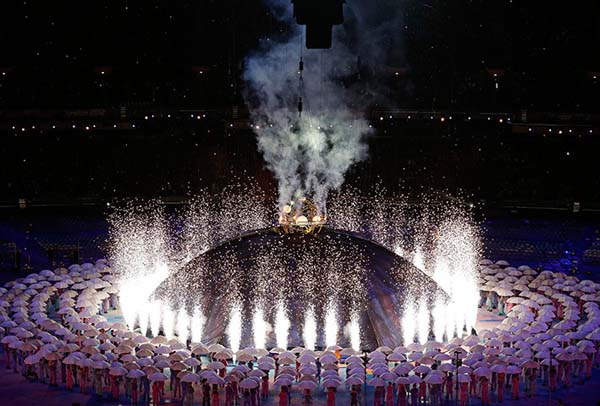 A giant umbrella appears to explode as it represents the Big Bang. It could also represent the seeding of our planet by asteroids, and finally the birth of man. 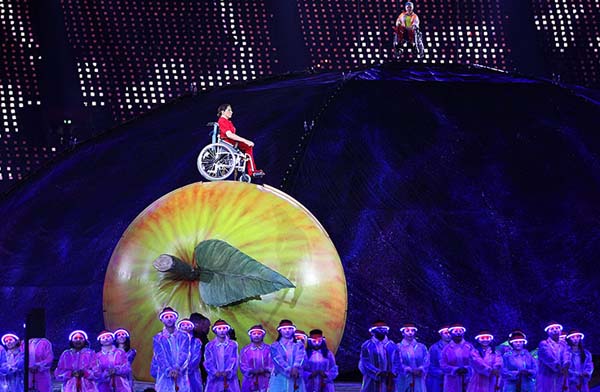 A giant apple symbolises Isaac Newton’s discovery of gravity. It also represents knowledge - the forbidden fruit; the biblical story of Adam and Eve and their expulsion from the Garden of Eden. The audience was given fruit to ’bite’ when instructed. This can represent their accepting/consuming science and rejection of the Abrahamic god and religion. 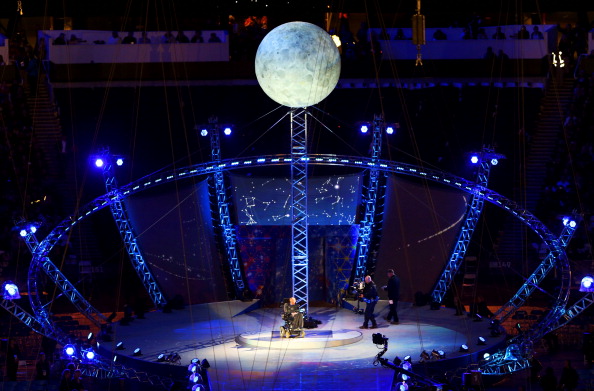 All under the watch of the full moon. Moon worship? The lights and ’arms’ surrounding the moon seem to replicate a spiked crown not unlike belonging to Babylonian goddess Ishtar (and more familiarly, the Statue of Liberty in the US.) 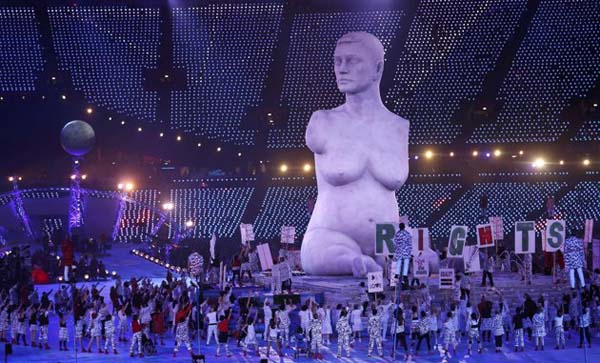 A large scale reproduction of "Alison Lapper Pregnant" by Marc Quinn, seeming like a moon goddess, Diana, Artemis, or Aphrodite of Milos. Combined with the feminine of the moon, this is powerful imagery. The statue is pregnant, lending more ’rebirth’ symbolism. Does this moon goddess carry the ’new man’ inside her? 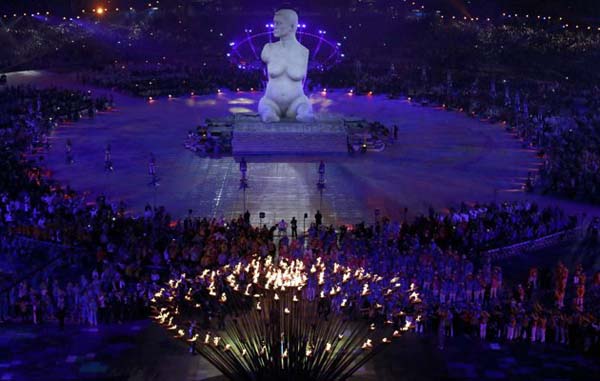 ...this being Britain, the words of Shakespeare once again were to make an appearance, with both Miranda of "The Tempest" and British actor Ian McKellen announcing that "the greatest adventure is what lies ahead."

In the ceremony, Hawking directed the fictional Miranda to "be curious" — and the stadium was transformed into a giant blinking eye. Along her travels, the curious Miranda was to navigate a maze to find an apple — and everyone in the stadium was given the fruit as they entered and encouraged to take a bite out of the fruit when she did.