50 days to save the world? I might listen to the doomsayers if they weren't such ludicrous hypocrites

Dec 21, 2009 Source: dailymail.co.uk
Not many people understand climate change. But they can recognise hypocrisy when they see it, and are also likely to count their spoons whenever wild-eyed politicians invoke the impending end of the world.

On Tuesday, Prince Charles flew to Copenhagen to attend the climate change summit, where he delivered a keynote speech.

He informed his audience that 'the world has only seven years before we lose the levers of control'. Not at all long, then. 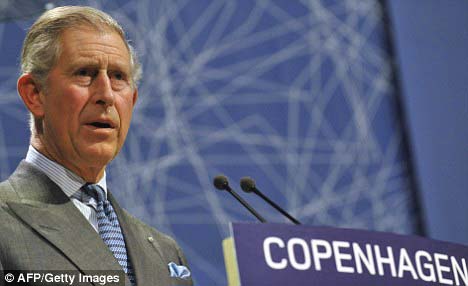 For the Prince this was an important speech with an important message.
If we have so little time, and man-made climate change is such a terrifyingly imminent threat, he might have taken a boat or train to Copenhagen, or even, as a symbolic gesture, decided to walk.

But he commandeered a jet belonging to the Queen's Flight, generating an estimated 6.4tons of carbon dioxide, 5.2tons more than if he had used a commercial flight. 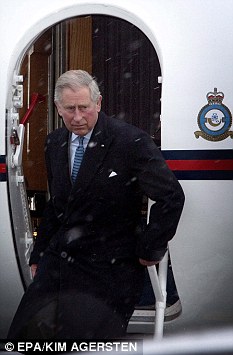 Prince Charles disembarks the Queen's Flight after using it to fly to Copenhagen. (right)

Meanwhile his fellow prophet of doom, Gordon Brown, was making his own way to Copenhagen the same day.

This is the man who proclaimed in October that we had '50 days to save the world'. Before leaving he conjured up on a television programme the certainty of 'floods and droughts' with 'climate change evacuees and refugees' if agreement is not reached in Copenhagen.

Mr Brown chartered a 185-seat Airbus to take him and 20 aides to Denmark. Was a smaller plane producing less carbon dioxide not available?

Could he perhaps have shared an aircraft with Prince Charles? Might he have considered taking a scheduled flight to the Danish capital, of which there were 16 on Tuesday?

Evidently not. It is odd, isn't it, how climate change doomsayers such as Prince Charles and Mr Brown are so often unprepared to make the smallest sacrifice in their own daily lives to address a threat which they assert is literally deadly.

Presumably any contribution would be helpful. And it is not easy in life to persuade people to give up things if you are almost ostentatiously unwilling to do so yourself.

The Copenhagen summit, supposed to produce an agreement limiting greenhouse gases, has, according to experts, the same carbon footprint as a medium-sized African country such as Malawi.

There are an amazing 34,000 delegates attending the event, and the grander among them are forced, says my colleague Robert Hardman in Copenhagen, to park their private jets in Norway because Denmark has run out of Tarmac, and to procure their gas-guzzling limousines from Germany.

Show me a climate control zealot and I can often show you a hypocrite, and a hypocrite, moreover, who speaks in apocalyptic terms about the world coming to an end - at a time not long hence and usually implausibly specific - if the rest of us do not immediately curb our lifestyles so as to produce fewer greenhouse gases.

The double standards and the grotesque exaggeration go hand in hand.
Some, at least, of the zealots do not really, honestly believe that things are as bad as they say. If they did, they might not go on serenely generating carbon emissions on such a scale.

They are trying to shock us into action by employing emotive language and invoking terrible dangers. In other words, they are treating us as fools.
Politicians shamelessly twist the facts to scare us witless. There has been an appalling case in Copenhagen this week.

Former U.S. Vice-President and climate change zealot Al Gore attributed to Dr Wieslaw Maslowski, an eminent climate change scientist, the belief 'that there is a 75 per cent chance that the entire north polar ice cap, during the summer months, could be completely ice-free within five to seven years'.

Dr Maslowski promptly denied that he would ever 'try to estimate likelihood at anything as exact as that'.

Seven years left in which we can tackle the problem. Fifty days to save the world. The North Pole melted within a few years.

Such outrageous claims, repeated by hundreds of politicians, and amplified by uncritical journalists whose brains have been captured by the climate change lobby, not a few of whom are to be found at the BBC, are bound to foster growing doubts in the public mind. 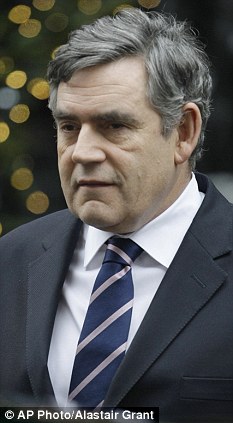 When he stated there were '50 days to save the world', Mr Brown, left, spoke of a looming 'catastrophe' which, if not dealt with, 'would be greater than the impact of both World Wars and the Great Depression combined'.

Such talk is a debasement of language. The world does not stand, as it did in 1940, at the very edge of an abyss, and to suggest that it does (as has the prominent scientist James Lovelock) would be an offence against history if it were not so ludicrously overblown.

There are the pressing political problems such as the state of the public finances that are extremely difficult to solve, and there is climate change, where the most hair-raising predictions are eagerly endorsed by most in the media and political class, and can scarcely be countered now.

What will the public think of politicians and climate scientists if in ten or 20 years' time their wildest forecasts should prove unfounded?

We should listen to more measured voices - not those who rule out the possibility of man having any role in climate change, or pretend that global warming is not happening, but those who think the hysterical political response is disproportionate to the severity of the threat.

One such voice is the world-renowned British-born physicist Freeman Dyson, who has written that 'the fuss about global warming is grossly exaggerated' and decried 'the holy brotherhood of climate model experts and the crowd of deluded citizens who believe the numbers predicted by the computer models'.

Nor should we forget that little more than 30 years ago the scientific and political consensus was exactly the opposite of what it is today, as the BBC2 programme Earth: The Climate Wars reminded us on Tuesday in what was an unusual spasm of climate change objectivity on the part of the Corporation.

In 1972 a group of distinguished scientists wrote a letter to the U.S. President, Richard Nixon, expressing their fear that the world was entering a new Ice Age.

If those scientists were so completely wrong then, it is not an affront to reason to question whether the more outlandish climate scientists and their supporters might not be overstating their case now.

Does this make me a 'flat earther' - a term of abuse recently employed by Gordon Brown to describe those who, unlike him, do not claim that Armageddon is around the corner?

If the avoidance of lunatic historical parallels or apocalyptic forecasts makes one a flat earther, I accept the charge gladly.

But I can't help wondering whether the real flat earthers may not turn out to be those like Prince Charles and Gordon Brown who count the months to disaster while merrily generating more carbon dioxide than a small African town does in a year.

Should we be surprised that the British public, confronted by this ugly combination of myopic hypocrisy and doommongering, is becoming increasingly sceptical?

As I say, we may not understand climate change, but we do know when we are victims of a fraud.