A new uncertainty in Libya operation: Who’s in charge? 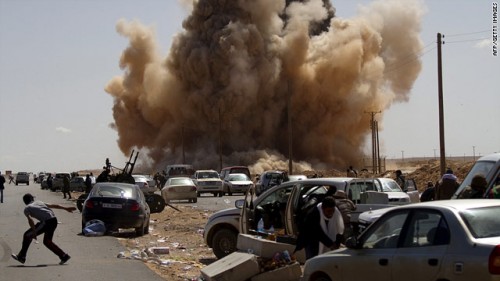 The fragile international coalition supporting military action in Libya showed fresh signs of strain Monday, as the U.S., Europe and Arab nations wrestled with the issue of who will take charge of military operations if the U.S. gives up control in the days ahead.

At the same time, the action in Libya, now in its third day, provoked harsh new condemnation from Russia and China, which had abstained in the United Nations Security Council during last week’s vote authorizing military measures to protect civilians from dictator Moammar Gadhafi.

The continuing political furor over the Libya intervention raised questions about the depth of support for the mission and what might happen in the event of setbacks or a prolonged stalemate between Gadhafi and anti-government rebels.

President Barack Obama said Monday that the United States, which has been coordinating allied air strikes on Gadhafi’s air defenses and ground forces, will transfer control of the mission within days, and that the NATO alliance would have a role.

In a letter to Congress on Monday, Obama said U.S. airstrikes "will be limited in their nature, duration and scope."

"We will seek a rapid, but responsible, transition of operations to coalition, regional or international organizations," he said.

But discussions at NATO over the alliance’s role have run into opposition from key members uneasy with a NATO imprint on the mission. And the Arab League, whose political support for Western intervention in Libya is considered crucial, also doesn’t want it to be a NATO mission, according to diplomats who requested anonymity because of the subject’s sensitivity.

As cruise missiles and jet-fired bombs began to rain down on Libya Saturday to neutralize Gadhafi’s air defense system, the U.S., with its unique military capabilities, was the only player in position to coordinate the strikes.

But the Obama administration is now eager to pass the baton before it’s seen as spearheading military intervention into a third Muslim-majority nation after Iraq and Afghanistan.

The Libya mission is shaping up as one of the most remarkable in recent memory. Not only is the U.S. eager to cede the lead to others, but command arrangements also are being worked out even as the initial stage of the operation is already under way.

France, which has been the most vocal in demanding action to stop Gadhafi, surprised some other NATO members by launching the first airstrikes on Saturday. That action was prompted by Gadhafi’s rapid advance on the rebel capital of Benghazi, according to a European diplomat who requested anonymity to speak more freely.

"If this goes south, if it doesn’t succeed quickly, then (U.S. forces) are going to have to assume . . . a much broader responsibility for what to do next," said Aaron David Miller, a former State Department official now at the Woodrow Wilson International Center for Scholars.

The European diplomat said the prime factor driving the discussions at NATO’s Brussels headquarters is the need to keep Arab nations on board with support, without which the Libya mission would be much harder - if not impossible.

"That’s why we have to be cautious," the diplomat said.

While the 22-member Arab League earlier this month endorsed a no-fly zone over Libya, only two Arab countries, Qatar and the United Arab Emirates, are publicly known to be contributing military assets, in the form of U.S. F-16s and French-made Mirage warplanes.

"Right now, we’re in discussions with our partners about the nature of that transition, the nature of the command structure that will follow on from the actions that we’re undertaking right now," Obama deputy national security adviser Ben Rhodes told reporters traveling with the president en route to Chile.

"We anticipate, again, that that command structure will include our European allies and will take place, we’ve said, in a matter of days, not weeks," he said.

In the end, diplomats and analysts said, a compromise is likely to be found in which a coalition of willing countries oversees control of the operation, but uses long-standing NATO command structures to do it.

The confusion "shows why you need to figure these things out in advance," said Robert Hunter, a former U.S. ambassador to NATO, now at the RAND Corp., a research organization. "I am surprised these things were not worked out beforehand."